All About the Landseer

This breed first came about in the 20th century somewhere between Switzerland and Germany. They later arrived in Canada and the rest of North America. 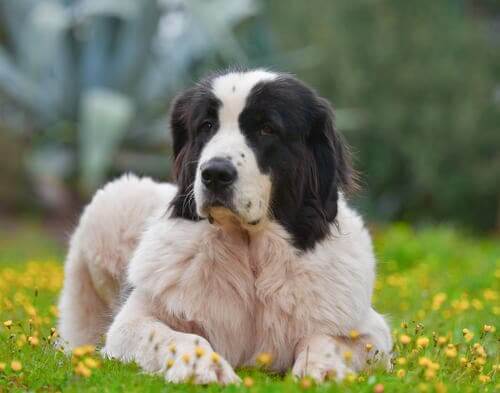 In many parts of the world, the Landseer is considered to be a variant of the Newfoundland. However, the World Canine Organization (FCI) considers it a completely different breed. Read on to find out how they got their name and other interesting facts about this black and white molosser.

The History of the Landseer

We don’t actually have an enormous amount of information about how this breed came about. But we do know that it shares its origins with the Newfoundland and many Central European molossers. They came about somewhere between Switzerland and Germany at the beginning of the 20th century and were later brought to Canada and the rest of North America.

Traditionally, these types of dogs have been used as sheepdogs and cattle dogs. They’re strong animals from the mountains of central Europe, such as the St. Bernard or the Bernese mountain dog.

The Landseer takes its name from the painter Edwin Landseer, who painted many portraits of children alongside this breed of dog.

Interestingly, in the Peter Pan Disney film, ‘Nana’ is depicted as a St. Bernard, whereas in the original text she is a Newfoundland or Landseer.

The Landseer is a large, strong, well-balanced dog and the males are slightly larger than the females. The males can measure between 28 and 31 inches in height whilst the females don’t measure beyond 28 inches tall.

They have a large, well-defined head with a square snout, a black nose, and slightly rounded triangular ears that hang down.

Unlike other cattle dogs, their lips are slightly droopy but stiff, so they don’t drool.

They have a very muscular body with a straight back and the tail will never be too high, being more drooped and relaxed.

Except for on their head, their hair is long, straight, and very thick. They have a double coat, so it’s important not to ever cut their hair.

They only come in black and white colors, although their head can be completely black except for a white stripe from their nose to their head.

Like many molossers, the Landseer is a friendly and good-natured dog. They’re fairly attached to their owners, which makes them excellent for living with children. However, they’re also protective and suspicious of strangers, and there are certainly some traits of a guard dog.

Although they’re smart, they can be stubborn or reluctant to learn new things. It’s really important to use positive reinforcement when training them because they don’t respond well to punishment.

If you’re thinking of getting a Landseer, it’s important to point out that they’re energetic dogs and very strong. But they shouldn’t need more than three good-quality walks per day. Once inside the house, they can be quite calm and lazy, enjoying long naps throughout the day.

Lastly, they like water and love to swim. Younger dogs, who need more exercise, will definitely enjoy trips to beaches or rivers.

Caring for a Landseer

The Landseer’s coat requires special care. You need to brush them once every couple of days to remove dead hair and any knots. Because of their double coat, cutting their hair in summer can be really harmful for them. It’s far better to just make sure that you keep brushing them through the hot seasons.

There are no inherited diseases associated with the Landseer, but you still need to be mindful of the common problems that large dogs suffer from, such as gastric torsion and dysplasia of the hip or elbow.

This means that, just like with any dog, it’s important to regularly visit your vet for check-ups and make sure that you follow their vaccination and deworming schedule.

Landseers certainly don’t cope well with high temperatures and definitely prefer the cold. If you live in a country where it’s hot most of the time, we don’t recommend that you adopt one. But regardless of where you live, you should take care to keep them well protected during the hottest hours of the day.

Landseers are large dogs, but they’re friendly and affectionate creatures. This combination of imposing physique with spectacular beauty is what makes them a separate breed from other molossers like the Newfoundland.