How Many Types of Molosser Are There?

What are Molossers? You may even have one yourself without realising it! Read on to find out... 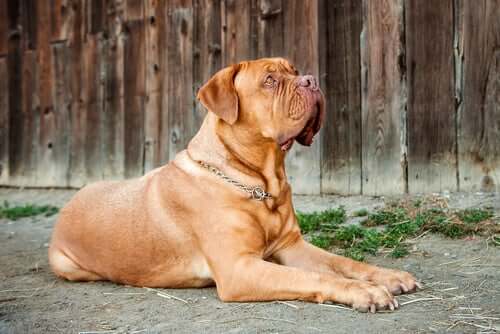 Molossers are a family of large, strong dogs, with round heads, and short fur. They are also known as Dogo, Mastiffs or catch dogs. In this article, we’ll tell you about some of the different types of molosser, as well as their main characteristics.

We can divide molossers into two broad categories:

In total, there are around 20 different types of molosser in the world. Let’s take a look at some of the different examples:

1. Types of Molosser – the Canary Mastiff

This is a large dog which was first developed on the Spanish Canary Islands. The first records of these animals date back to the 16th century.

Farmers originally bred Canary Mastiffs as cattle dogs, although people also used them for dogfighting. While they are extremely muscly and robust, they are also surprisingly agile animals.

Originating from France, the Dogue de Bordeaux is one of the largest, strongest, and most powerful members of the Molosser family. Their strong, decisive character has meant that people have used them as guard dogs for hundreds of years.

It is thought that the Dogue de Bordeaux may date back as far as the Celtic era, and was originally used for hunting and fighting.

Also known as Fonni’s Dog (after the region of Fonni), the Sardinian Shepherd Dog is an excellent guard dog, protecting both property and livestock. They were once used by the Italian Army during the Libyan military campaign.

These dogs have a coarse coat, and can reach up to around 23″ in height. For some, their intense, piercing stare can be a little intimidating.

This is a relatively “new” breed, as it wasn’t officially recognized until the 1990s. However, the Guatemalan Dogo was first created back in the 1890s, from crosses between the Bull Terrier, Boxer, and Dalmatian.

Their coat is mainly white, with small patches of light brown fur. They have square heads and strong teeth that meet in a scissor bite.

The Ca de Bou dates back to the year 1229. They are closely related to the Canary Mastiff, and were originally used as bull-baiters. Later however, people also used them in dog fights.

Today, however, these dogs primarily serve as guard dogs or family pets. They are placid, affectionate and loyal animals, that rarely bark.

As the name suggests, this particular breed originates from Argentina. The first Dogo Argentino was bred by a doctor, who wanted an animal that could hunt puma, foxes and wild boar. Like many molossers, they were also popular fighting dogs.

They are typically white in color, with a large head, strong jaws, and upright ears. Adult males can weigh anywhere between 100 and 120 lbs. They work well in packs, often serving in the military, or as search and rescue dogs.

Believe it or not, the Great Dane is another member of the Molosser family. These large, clumsy animals are affectionately known as the “Apollo of Dogs”.

These are muscular dogs, with a strong constitution. Thanks to the famous Hanna Barbera character, Scooby-Doo, Great Danes have enjoyed great popularity in recent years. These gentle giants have a sweet temperament, and generally get along well with other dogs. They are rarely aggressive, and are easy to train.

Experts believe that the Phoenicians may have brought the first English Mastiffs to Britain in the 6th century BC.

English Mastiffs normally served as guard dogs, protecting both people, and livestock. However, they may also have fought in Ancient Roman arenas. After the Second World War, these dogs almost became extinct, but thanks to imports from Canada and the US, their numbers slowly recovered.

Other members of the Molosser family

As you can see, molossers are typically large, robust dogs, with strong characters and great determination. These historic breeds are nothing if not striking.

5 Breeds of Molosser Dogs
Molosser dogs are also known for their strong jaws and short snouts. They're used as guard dogs and they come in all sizes. Read more »
Link copied!
Interesting Articles
Dogs
The Bergamasco Shepherd Dog Breed of the Italian Alps