Discover Everything There Is to Know about the Great Dane

Don't be put off by the considerable size of the Great Dane. They are not only a loving and docile breed, but also very intelligent, with an interesting history. 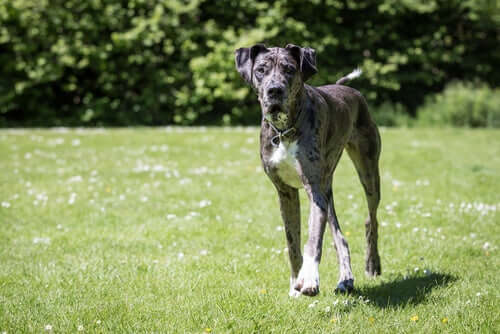 The Great Dane is one of the largest dog breeds and, although its size might be intimidating, their gentle character and friendly spirit make them perfect for homes with children. This article will explain all you need to know about the Great Dane, the “Apollo” of dogs, known for their proportioned physique.

The origins of the Great Dane

The Great Dane is thought to be the ancestor of dogs that were bred for hunting boars. They are similar in appearance to English Mastiffs and sighthound breeds.

In 1878, a Berlin committee of breeders started to group the characteristics of “dogge” (mastiffs) under an independent German breed, known as “Deutsche Doggen” (German mastiffs).

At a meeting held in Berlin two years later, breeders and judges agreed the standards for this emerging breed. Although the Great Dane is nowadays seen as a “gentle giant”, originally these dogs were hunters and aggressive fighters. In fact, people really feared their temperament and fighting skill.

As time passed and new litters were born, Great Danes became friendly, kind and caring creatures. The breed then found fame thanks to the animated children’s series “Scooby Doo”.

Physical characteristics of the Great Dane

Great Danes can seem quite intimidating at first glance, which is due mainly to their considerable size (which reaches nearly 7 feet over their hindquarters). They have thick hair that can be fawn, brindle, harlequin (white with black patches), black or blue in color.

Their nose is rectangular in shape and dark in color. They have large eyes, drooping ears and a long, thick tail that is quite curved. They move in a very agile, rhythmic and flexible way. In contrast to other large dogs, Great Danes don’t appear ungraceful or clumsy when they walk.

Great Danes, one of the biggest dogs in the world, can be confusing at a first glance. When you see their size, you might think they are a dangerous or aggressive breed. However, when you interact with them, you will realize that they are very docile and loving.

They are known as “gentle giants”, as they’re not only good with people (especially with children), but also with other animals. Through the right social interaction and training, Great Danes can behave very well from when they’re puppies. However, they can be timid or even aggressive in new environments or with people they don’t know.

Great Danes are ideal for families with children because they provide safety during their childhood. As the largest lapdog in the world, they provide all the love and happiness you could need. It’s worth considering that they need frequent company, so it’s not advisable to leave them alone for long periods of time throughout the day (they’ll destroy anything in sight).

Another factor to bear in mind is the space that a dog of this size needs. A house with a garden or close to a park is the best home for a Great Dane. That way, they can happily play, exercise and run to their heart’s content.

In terms of the care they need, they’re quite straightforward to look after. They need to be brushed just once a week to remove any dead hair. They only really need a wash if they get dirty, for which it’s best to take them to a dog groomer due to their size. Don’t forget that your food budget will also need to be quite high.

The bad news is that Great Danes are vulnerable to certain illnesses. For example, Great Danes can suffer from twisted stomach, cardiomyopathy, hip dysplasia, cataracts, Wobbler syndrome, elbow dysplasia and osteosarcoma. It’s important to schedule check-ups with your vet every year to prevent and treat these illnesses in time.

Bearing all of this in mind, we would recommend that families adopt Great Danes when they’re puppies and make sure they get a lot of social interaction. They’re an intelligent and capable breed, so training is quite straightforward. We recommend that they get moderate exercise and daily walks to better manage their energy.

K9 Dogs: The Nine Perfect Breeds for this Job
As opposed to their policemen counterparts, K9 dogs are most appreciated and respected by everyone. Their olfactory abilities are superb. Read more »
Link copied!
Interesting Articles
Dogs
The Causes of Epilepsy in Beagles