The Great Dane: the Noble Giant

The Great Dane is a dog that can't go unnoticed. That's because this giant is one of the largest sized dogs on the planet. 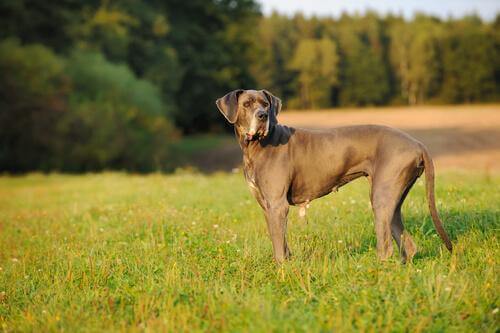 Despite its very large size, the Great Dane is still a very humble animal. It’s actually a very noble, friendly and affectionate animal that gets along really well with humans.

A few things about this breed’s origins

Scholars can’t seem to agree about the origins of the Great Dane. However, they do agree that this incredible dog has been at man’s side for centuries performing different tasks, such as:

Actually, images that resemble Great Danes have been discovered in the tombs of Egyptian Pharaohs and in the Assyrian bas-reliefs. The images depict these dogs hunting. And, in the Middle Ages, they were seen in prints and engravings in different parts of Europe.

Also, it’s known that the Romans had dogs as large as them, but, at the same time, more agile than the molossus. It’s possible that they were the ancestors of Great Danes and that they spread throughout the old continent. On the other hand, other researchers are more inclined to think that they were introduced to Europe by the Alans, a nomadic people from Asia. That’s why they think that they’re descendants of the Tibetan Mastiff.

A third possibility is that the Great Dane is the result of a union between the molossus and the fast and graceful greyhound. This resulted in a strong but agile breed that could hunt big game. Then, as time went on, people began crossing it with local breeds.

Although its large size can be intimidating, the Great Dane is a loyal and affectionate dog. It loves children, so it’s an ideal pet for the whole family.

Physical characteristics of the Great Dane

They are well-balanced and proportionate animals with a strong, muscular and tough build. Its coat is short, shiny and can be a variety of colors: black, white, metallic blue, harlequin, and white, with black or yellow spots.

As you can probably guess, they have wide and well-developed jaws. Also, its long and muscular neck gives it an upright bearing. Other important characteristics are their drooping ears, high-raised tail and slightly arched back.

It has medium-sized eyes that are usually a dark color. They give him a lively and intelligent look.

A giant and adorable dog

Who doesn’t remember the great Scooby Doo? That endearing character is actually based on the Great Dane breed, a docile and amiable dog, despite its imposing appearance.

So, they’re the ideal dogs for children. They’re extremely loyal and very faithful. Although they’re more reserved and protective with strangers, they still won’t bark or get aggressive. That is, unless they see danger.

Not only are these dogs happy, affectionate and playful, but they’re also extremely intelligent. That, along with its calm nature, will make your training sessions much easier.

Special care for the Great Dane

Exercise is a very important part of this breed’s life. Over time, his joints may start to suffer, so make sure he doesn’t get overweight.

Also, a good quality diet is vital for his health. Make sure you give him the adequate amount of food for his size without exceeding the vet’s recommendations.

Since these dogs don’t like to spend a lot of time alone, playing is their favorite thing to do. So, if you’re willing to take on the expenses and can dedicate the amount of time this dog requires, you’ll find a lifelong loyal and affectionate companion.

5 Reasons Why You Should Adopt a Large Dog
A large dog is one of the most beautiful and fun creatures that exists among dogs, as, in addition to their large size, they are usually faithful, affectionate and protective. Read more »
Link copied!
Interesting Articles
Dogs
The Bergamasco Shepherd Dog Breed of the Italian Alps