English Bulldog: All About this Breed

The English Bulldog has a sweet disposition. They're highly predictable and dependable, and they've low endurance so need only moderate exercise. So, it's an excellent pet for households with children. 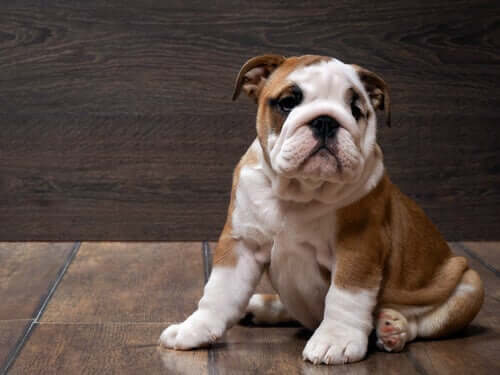 The English Bulldog breed originated in the United Kingdom. They used to be the stars of dog fights –a practice fortunately banned since 1835. This dog is, in fact, one of the symbols of this country. Today, we’d like to tell you all about this cutie (in case you’re thinking of adopting one).

History of the English Bulldog

The origin of the breed dates back to the Old English Bulldog imported to England and later bred with the local mastiffs. This combination produced the first English Bulldog.

At the beginning of the seventeenth century, this dog resembled a Boxer. That is, they were lighter than the current specimen and used purely for sports. They also used it to create other breeds such as the Bull Terrier, the Bullmastiff, and the Beagle. Its original function was as a fighting dog. Moreover, due to its strength, their main opponents were larger animals such as lions, bulls, and even bears.

The name English Bulldog pertains to its first owners, the butchers. Its function was to run around the bulls and make them exercise. According to the beliefs of that particular time, this would make the bulls’ meat softer. Another theory says that bulldog is a variation of bandog, which means “hardened dog”.

Later the breed got a resurgence by crossing that version of the dog with the Pug, and it’s for that reason that today they have a flat snout and a plump body. However, they never lost their physical strength, pain resistance or courage.

Their thick shoulders and big head in proportion to the body added to the thick folds in their face are the most outstanding traits of this breed. Also, their eyes are large and black, and they have a short snout with folds above the nose with hanging jowls. Their lips are droopy and their teeth pointy.

The English Bulldog’s coat is short and its usual colors are beige, red, white, brindle, or black. An adult male weighs about 49 pounds and a female 40. People often cut their tails to make them suitable for inclusion within the “beauty” standards for this breed.

As for their temperament, it’s worth noting that this is a lively dog, as well as being safe and courageous. Even though it seems quite fierce in appearance, they’re quite tame and harmless with those around them, including children.

This breed of dog has a highly affectionate nature and it’s gentle and sociable. It’s for this reason that they’re ideal for families with small children. Do keep in mind that it’s not the most obedient kind of dog, so you’ll need to have a lot of patience when it comes to their training.

The English Bulldog as a pet

A highly tolerant dog, they love to play and they get along well with other dogs and animals. Amazingly, especially considering they started their lives as fighting dogs, they rarely start a fight. In addition, they’re smart and don’t bark too much, although they definitely snore very loudly when they sleep!

The English Bulldog adapts easily to either an apartment or a house with a garden. They’re not a high-energy breed and are mostly content with short daily walks.

They often have health problems related to their respiratory tract. For example, Brachycephalic Airway Obstructive Syndrome is common in them during summer. They shouldn’t exercise on hot days, and they shouldn’t play rough or walk too much either. This dog is prone to heatstroke due to their cranial shape.

In addition, they may also have chronic skin problems due to the folds on their face and body. They may get infected by fungi if they get wet and don’t dry out properly. As a result, it’ll smell quite bad.

Furthermore, you must pay close attention to the English Bulldog’s diet. Given that they’re a sedentary race, it’s common for them to gain weight and they can easily become obese. Obesity could, in turn, lead to hip dysplasia and bone injuries in their extremities, as well as heart disease.

In general, these dogs need some extra care to ensure their well-being and health. However, you’ll be the recipient of their endless affection and playfulness that’ll last for several years.

So, keep them inside a cool room with AC during summer, take them out for a little daily exercise, feed them a balanced diet, and have a checkup schedule with your vet. As you can see, this is all you need for the English Bulldog to become your next best friend.