Home » Breeds » Dogs » The Beagle: Everything You Want to Know

The Beagle: Everything You Want to Know 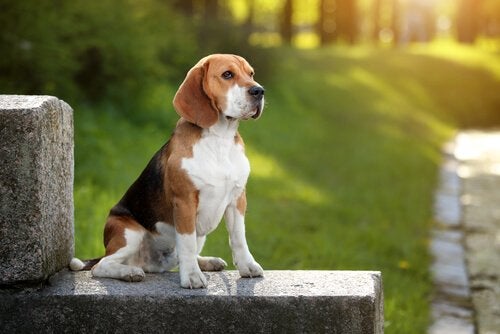 The Beagle is a very charismatic and energetic breed of dog, the perfect size for a small home. With their hunting dog instincts, Beagles are excellent at tracking down and finding all kinds of things; they’re sure to keep you and your family occupied for hours of fun. In this article, we’ll tell you all about the Beagle breed.

History of the Beagle

This small- to medium-sized breed, similar in appearance to the Foxhound, has existed for over 2000 years. More specifically, they come from Ancient Greece. These bloodhounds were used to hunt hares and deer.

In the eleventh century, Beagles were introduced to the United Kingdom by William the Conqueror. Soon after, he crossed them with greyhounds to make them faster. The now extinct “talbot” breed also is an ancestor of the modern Beagle.

In the Middle Ages, the word “Beagle” was used to refer to small hounds. Beagles were favorites of royalty (Kings Edward II and Henry VII had hunting packs). Elizabeth I chose them as pets for company and fun.

In the 18th century, the two races from which the modern Beagle is descended, the North Country Beagle and the Southern Hound, were developed. In 1830, in Essex, England, the Rev. Phillip Honeywood established the first breeding center for Beagles. The breed at this time was still a favorite of monarchs, like Prince Albert and his wife Queen Victoria.

A decade after the Rev. Honeywood established his breeding kennel, there were already about 20 Beagle breeding centers in England. Around this time, the Beagle Club was formed.

Until this point, Beagles only lived in the United Kingdom, but they were later taken to the United States, where they soon became very popular — even more than in their native country.

The Beagle has even made it into works by William Shakespeare and movies (a Beagle was the protagonist of “Like Dogs and Cats”). Former US President Lyndon Johnson had several Beagles join him in the White House.

Characteristics of the Beagle

With its small size and short snout, wide nose and large, dark eyes, the Beagle is easily confused with the Foxhound or even with the Cocker Spaniel (when shaved). This breed has:

Along with the Bloodhound (also known as San Hubert’s Dog), the Beagle has the most developed sense of smell. A Beagle can detect a mouse from several meters away. They are best at following scents on land. In fact, they are used extensively in mountain rescue teams and after natural disasters to search for humans.

The longevity of the Beagle ranges from 12 to 15 years. They’re prone to epilepsy and hypothyroidism. In some cases, a Beagle may suffer from hip dysplasia and arthritis in the joints, mostly seen in overweight dogs.

Personality and temperament of the Beagle

Beagles are very jovial and energetic dogs. They’re affectionate, brave and intelligent. As they were raised to live in a herd, they love to be surrounded by people and other animals.

They are usually quite quiet, except when left alone — when they have a tendency to destroy furniture and other things. Beagles adapt well to any lifestyle, from a small apartment in the city to a house in the countryside.

Beagles can be quite naughty when they’re puppies and if there are small children in the home. They are usually described as “happy” dogs, affectionate and somewhat shy. They are not usually aggressive, although they can be cold with strangers.

Beagles do not “serve” well as guard dogs, but do well as watchdogs, as they will bark or howl at the approach of unknown people. Decisive, determined and very capable, the Beagle can be difficult to train, though obedient to its owner. Once the dog has detected a scent, they’ll follow it to the point of exhaustion. Distraction is unlikely.

Before adopting a Beagle, remember that they have a lot of energy when they’re happy or want to play. They’re very easy to clean because of their short hair and small size. However, their ears do require extra care because of their shape.