Thanks to their recent past, this breed is quite clever when facing problems. Also, this breed will not hesitate to warn you by barking when a stranger is nearby. 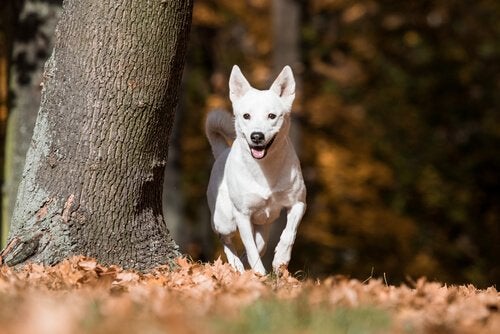 It may look like a white shepherd, but Canaan dogs have their tails curled over their backs, which makes us think that they’re not shepherds. Interestingly enough, this breed has its own history.

The history of Canaan dogs

The story of Canaan dogs is very curious. They’re a primitive breed that lived in the Middle East and performed the usual jobs of shepherd dogs. This is that they accompanied the cattle to the mountains, protected them from predators and also protected the house or village from intruders.

However, in the second century, the Roman invasion dispersed the population of that area and the breed, which had been raised and shaped to work with humans, became savage. They lived freely in the Negev desert, and for a long time, they were a feral breed.

For almost 2,000 years, Canaan dogs were wild but dependent on humans. A few lived near the livestock of the remaining villages, others were domesticated again and many others survived by eating trash.

At the beginning of the 20th century, some inhabitants of those areas needed the help of tough, intelligent dogs that were good guardians. The Canaan dog breed was the best choice, and they adapted surprisingly well to their new life as working dogs and companions.

Canaan dogs are of average size, weighing between 18 and 25 kilograms. Males are usually larger than the females. However, in general, they tend to be between 50 and 60 centimeters at the withers. These dogs have a square body and balanced appearance that consists of being agile and muscular, like many other shepherd dogs.

They have a wedge-shaped head with a square nose and tight lips. Their head seems wider than it really is because their ears are set low. their ears are triangular and stick out above their head. They can easily move in many other directions, and they are tremendously expressive.

One of the most striking features of this breed is their tails because they curl over their backs. Although at first sight, they look like sheepdogs, this breed has a tail that’s straight and hangs low. Canaan dogs are actually a primitive breed, like the Siberian husky.

These dogs have two layers of fur. The inner layer is thick like wool, which protects them from the extreme temperatures of the desert, the cold during the night and the heat the day. The outer layer of hair is medium length and really thick.

Their fur comes in several different colors: light brown, reddish or black. They may have a mask-like marking on the face, but it must be symmetrical. The official standard of the breed doesn’t accept gray, striped or completely black. Their mask and white markings can appear in combination with any other color.

The behavior of Canaan dogs

Centuries of living in the wild have left a mark on this breed. They are independent dogs with a great ability to solve problems. Instead of being stubborn, they are intelligent and, really think about what they want is really worth spending their time and energy.

Canaan dogs don’t handle boredom and inactivity well. They are accustomed to being active, searching for food or playing with their companions. That is why mental stimulation is essential for this dog breed. These dogs are great for going on long hikes in the mountains. They require at least three good quality walks a day.

Due to their independent but guardian-like spirit, they distrust strangers, both dogs and humans. They will not hesitate to bark if something strange happens around them; however, they rarely show aggression. These dogs are meant to scare off intruders and not hurt them.

Since they have recently been reincorporated into human everyday life and, thus, their artificial genetic selection has been very brief, there are still no common hereditary diseases that are common within this breed. Despite this fact, their health and veterinary appointments should not be put to the side.

It’s necessary that you comply with the vaccination schedule proposed by your trusted veterinarian. Since this breed likes running off into the woods, its necessary to treat them for any internal and external parasites. Likewise, you should frequently check their bodies for parasites, spikes or splinters that are stuck in their legs or ears.

Canaan dogs are a thousand-year-old breed, which survived that lived a semi-wild lifestyle for a long time. However, their adaptation to living with humans can be simple for everyone, provided you take their intelligence and need for mental exercise into consideration.