Home » Breeds » Dogs » Do You Know What Causes Graying in Dogs?

Do You Know What Causes Graying in Dogs?

Learn why your dog's fur turns gray in this fascinating article. 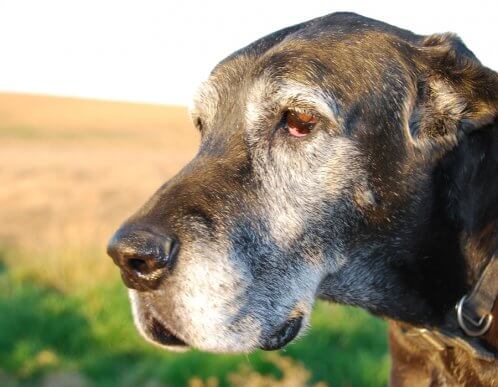 Although it’s true that graying in dogs is attributed to age, the appearance of gray fur can be premature due to several different factors.

It’s very common for dogs to have gray fur. As in humans, aging is one of the main reasons that this happens to our pets. However, it’s possible that this will occur due to premature aging.

If a dog is younger than five years of age and has a lot of gray fur, it may be a symptom of a health problem. Read on to find out some of the reasons that this occurs and when we should be concerned.

The most common reason for the graying of a dog’s fur is aging. However, when a young animal begins to get gray fur, we consider this premature aging. There are many reasons for this, but most of the time it’s an indication that there’s a problem.

A young dog with a lot of gray hair generally has other health issues. In this case, there may be symptoms such as weight loss, lack of appetite or loss of fur.

There are also many cases where it’s associated with problems of stress. Because of the stress, the dog will also be anxious or aggressive.

Finally, on some occasions, premature gray fur may be due to genetics. For example, dogs that are black have more of a propensity to have early graying. The breed is also a determinate.

Causes of graying in dogs

If your dog has white fur around his mouth, it’s most likely that they are gray hairs from aging. These white hairs tend to also be in other areas of the body. For example, they may be around the eyes.

Apart from any health issue, dogs begin to lose their original color from a certain age. Normally, this tends to occur at approximately 10 or 11 years old.

The color of a dog’s coat depends on a molecular pigment called melanin that is produced in each follicular capillary. With age, the DNA becomes less capable of producing the cells that are responsible for creating melanin.

There are also other hypotheses that explain the origin of gray fur. This is mainly when they appear prematurely. For example, sometimes the follicles produce more hydrogen peroxide then normal. This would result in whitening of the fur.

Why do dogs gray prematurely?

As mentioned earlier, premature graying of a dog’s fur may have several different causes. It’s important to know and take timely measures to correct this situation and prevent health problems.

One of the causes of premature graying can be a poor diet. Sometimes the discoloration is due to insufficient nutrients. This can occur when dogs don’t eat enough meat.

In addition to graying, if your pet shows symptoms of hair loss, lack of appetite and weight loss, he could have parasites or something even more serious. If these symptoms occur he needs to see a veterinarian for treatment.

Mainly, the reason that gray fur appears prematurely in dogs is stress.

There is a very close relationship between premature graying in dogs and anxiety. It’s important to pay attention to these signs. This way you can make the necessary changes for the well-being of your pet.

Anxiety and stress in dogs tend to show themselves through the destruction of objects when they are left alone.

This psychological state also tends to lead to hyperactivity even after a dog has had exercise. He finds it impossible to be calm, he is permanently extremely nervous or he jumps up on people.