Dogs with Alzheimer's: What Are the Symptoms?

Getting senile is just another thing that makes dogs similar to humans. And they also need much love and care when they do! 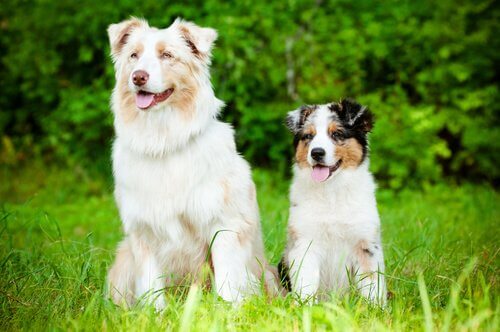 Experts say that half the dogs over the age of 15 suffer from canine Alzheimer’s. Some symptoms are loss of hearing, vision and memory loss.

According to this, one out of every two dogs over the age of 15 would have Alzheimer’s disease. The cognitive dysfunction syndrome causes the elderly dog to get lost easily. They also experience memory loss, may become disoriented and sometimes won’t recognize their owner.

Once the dog has acquired this disease, he begins losing his sight and hearing. The dog’s brain isn’t working normally anymore because of this type of dementia. Therefore, it’s necessary to know what canine Alzheimer’s disease is, and what the common symptoms are.

Characteristics of dogs with Alzheimer’s disease

Canine Alzheimer’s disease is a cognitive dysfunction that causes a series of changes in behavior detected in elderly dogs. This is caused by a degenerative process in the brain and spinal cord.

To put it simply, it’s as if the animal’s brain starts developing backwards rather than evolving. This explains the loss of their ability to learn, as well as their memory loss. The deterioration in their pet’s health can be a painful process for many owners.

Other visible changes occur in their behavior. It’s normal for the dog to be grumpier and to need more time to sleep. They’re also usually less patient with younger dogs. Some of them may seek time for solitude in a quiet space.

Symptoms in dogs with Alzheimer’s disease

Among the most frequent signs of the disease in dogs is a decrease in activity. Less interaction with their owners and some disorientation are common.

Alzheimer’s disease and aging will even cause the dog to start limping. You may need to take it for shorter walks in the open air. Sometimes it’ll need a hand to climb or to go down the stairs, or to get into the car. In time, their eyes and ears also suffer from deterioration.

A dog with advanced Alzheimer’s may lose orientation in his own home. This is because he doesn’t know where he is. Because of the memory loss, sometimes he won’t recognize his owner or respond to his call. Loss of appetite is also another common symptom found in senile dogs.

It’s considered that dogs begin their senior years at the age of six or seven. Their life is shorter than a human’s, so when they turn seven, they officially become elderly. Like the body, the brain also ages. However, not all dogs become old around the same age.

Normally, dogs become a little grumpier as they become senile. This is only a logical consequence of the deterioration of their physical and mental abilities. Therefore, it’s necessary for the owner to compensate for this stage with affection and caressing.

Senior dogs appreciate quietness more. Although they’ve always needed to be comfortable at home, at an old age they’ll need it even more. A quiet and warm place to be comfortable is essential for them. However, the fact that they need more calmness doesn’t mean that they enjoy being alone. You’ll need to provide more love and companionship than ever before.

The situation gets worse when the dog’s left alone by the owner for too long. Usually, the distancing causes them stress or even aggravates illnesses that they may already have.

Other symptoms in senile dogs with Alzheimer’s

Senile Dementia in Dogs: Everything to Know
Senior Dog Dementia is a practically inevitable aspect of our best friends’ natural aging process. However, it is possible to take various measures to improve their quality of life during their old age. Read more »

If you love water activities, you’d probably like to swim with your dog. However, your dog may or may not…