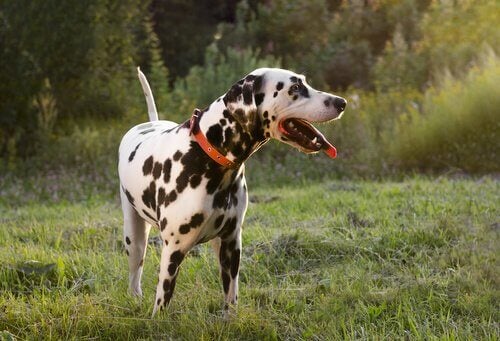 Studies showed that dogs suffer an increased heart rate and anxiety when seeing another dog with their tail tilted slightly to the left. The explanation is due to negative sensations such as feeling in danger or perceiving a threat.

Nevertheless, when a dog tilted its tail to the right, the other dog remained relaxed. For this reason, the tail wagging is a sign of a type of communication. This is because of the asymmetric functioning of a dog’s brain. In this case, the tail would tip to the side of the active cerebral hemisphere at a given time.

For us, as human beings, it’s not easy to detect dog tail movements. However, for dogs it’s natural.

Almost all our pet’s tail movements say something either to us or to other animals. That’s why it’s important for dogs to have a tail. It’s good for socializing and to avoid problems with other dogs. As we can see, it’s the closest thing to human facial expressions.

How A Dog Communicates With Their Tail
Animals can't talk like us, but they can express their feelings in other ways. In this article, we'll tell you how a dog communicates with his tail. Read more »
Link copied!
Interesting Articles
Dogs
Gordon Setter: The Most Beautiful Pointing Dog