Dogs of the "Bullenbeisser Generation"

In this very interesting article, discover the dogs of the Bullenbeisser generation. Read on to learn more about these breeds! 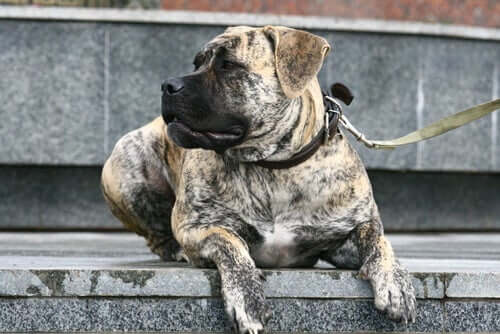 Dogs that came from a German breed (that’s now extinct) belong to the so-called “Bullenbeisser Generation”. If you want to know more about them, read the following article.

The extinct Bullenbeisser made several current dogs (except for the Cordoba Fighting Dog, which also went extinct). Among its main characteristics, we can highlight its hunter ability, molossoid body, its short, brindle hair, and large muscles. When you look at a photograph of a specimen of this wide and strong-jawed dog, it may be easy for you to see several similarities with other breeds.

What breeds belong to the Bullenbeisser generation?

Good guardians and ideal family companions, the breeds that make up the Bullenbeisser generation are the following (some are recognized by the Fédération Cynologique Internationale (FCI), while others aren’t):

This is the only large Bullenbeisser generation dog. This dog has an awkward gait and is very friendly and kind. It became “famous” due to Scooby-Doo. The Great Dane isn’t a dog recommended for new dog owners because it requires a lot of care. For example, it’s prone to gastric dilatation-volvulus and also needs a lot of food every day.

One of its main characteristics is loyalty. In addition, it has a unique temperament that often isn’t related to the size of its body. As for its coat, it can be fawn, brindle, blue, black, or harlequin. It always has a black nose.

German and part of the Molosser group, it first appeared in Munich in 1895. It was a war dog until the police started using it. It has a flattened snout, wrinkles on the face, cropped ears, and a short tail. Boxers also have short hair, that’s either fawn or brindle.

As for its temperament, this is a very active, vigilant, and loyal dog. This dog is easy to train since it’s quite obedient. You must be careful with it because it can be somewhat territorial and dominant with other dogs.

This breed was developed by a doctor who loved to hunt large animals such as wild boar. One of its main characteristics is its completely white coat, except for the nose, which is black. It has a large head and a square neck. Some owners crop their ears.

It’s considered a potentially dangerous dog. Because of this, it’s banned in several countries, such as Spain. However, when it’s properly socialized and trained, it can be a good pet. It requires a lot of physical activity and, due to its skin tone, it can’t stay long in the sun.

Another representative of the Bullenbeisser generation. It’s of the molosser dog type and is a very good runner. People used it as a guardian dog and to manage cattle in the Iberian Peninsula, as well as for hunting deer and wild boar. The temperament of the Alano Español is characterized by tranquility, nobility, loyalty, confidence, and courage.

Although this dog breed that originated in the United States isn’t accepted by the FCI, it belongs to the United Kennel Club in its native country. Besides being one of the dogs of the Bullenbeisser generation, it’s also considered a potentially dangerous dog breed.

In addition, it has a very strong temperament. However, unlike what people believe, it isn’t aggressive with humans by nature. In fact, people need to train it for this purpose. It has a slightly arched lower back, round, dark eyes, wrinkles on its face, prominent nose, and a square jaw.

This dog is a native of South Africa and its ancestors aren’t only the Bullenbeisser, but also the Great Dane and Bullmastiff. It’s a guardian breed, used for heavy-duty labor and self-defense. It can weigh up to 198 pounds (90 kg). This dog is also strong, muscular, and big. Its head is square and it has a black nose. The ears are v-shaped, its hair is short and tawny, brindle, brown, red, black, or gray.

This is an excellent watchdog and, thanks to a local veterinarian, it achieved international recognition of the Fédération Cynologique Internationale (FCI). The Guatemalan Dogo belongs to the Bullenbeisser generation and was the result of the crossing of a Dalmatian, a Boxer, and an old type Bull Terrier.

Medium-sized, its coat is predominantly white with some dark spots. It has a black nose. This dog has hanging lips, strong jaw, square head, and pointed ears. This breed is quite sociable with people and not very territorial. However, it’s a little aggressive with other dogs.

The Boxer Dog who Found a New Home
Today we're going to tell you Toby's story, a Boxer who was abandoned by his owners, but who was given a new life and a new home.  Read more »
Link copied!
Interesting Articles
Dogs
The Bergamasco Shepherd Dog Breed of the Italian Alps