It's a very curious breed, with good character, attached to its owner, and protective. Keep reading to learn about English bulldog behavior. 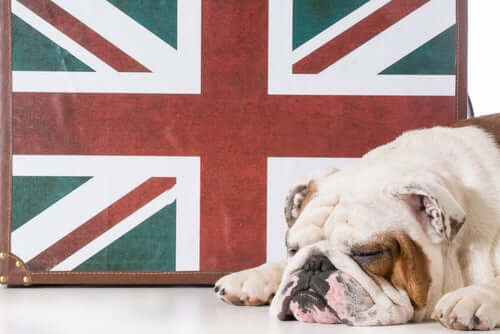 When you decide you want a pet, it’s important to know its characteristics. That way, you can make sure you give it what it needs. At the same time, your character adapts to what you want in a dog. If you want a calm and patient friend, then it’s good to know in depth the characteristics and behavior of the English bulldog.

This is a stocky, medium-sized dog with a flat face. The shape of the face and the droopy lips might make them look rather on the sad side. However, this couldn’t be further from the truth because they are very lively dogs.

The English bulldog is one of the most popular breeds among celebrities. Celebrities like Brad Pitt, Ryan Gosling, and Adele, and athletes like David Beckham and Michael Phelps have mentioned they like this breed.

In addition, surely you remember the famous image of the British Prime Minister, Winston Churchill, with a bulldog.

These grumpy looking dogs might seem aggressive, but really they’re not. Although they were originally used to fight, this breed is peaceful and calm. In fact, lots of people think it’s the friendliest breed around, despite how serious it looks.

Looks can be deceiving because they’re very docile animals. In fact, they’re lively and have playful, happy attitudes. They like to play with balls, and they’re very determined and brave.

If you live in a place where dogs barking isn’t accepted, then this can be an ideal breed because they don’t bark much. Sometimes males might want to confront each other. However, they’re very tolerant towards other animals. Therefore, they get along well with other pets.

Additionally, these dogs like to be with people, and they like feeling like they’re part of the family. On the other hand, they don’t like being alone, and might show it by destroying the house. If the dog is going to spend lots of time outside alone, then you might want to consider another breed.

Another common behavior of English bulldogs is that they’re mentally stable. Therefore, they make great pets for children. Also, they’re very patient and accommodating, so they’re great for even the smallest and most restless members of the house.

They’re also smart animals that remember what they learn. Despite being quite stubborn, this dog breed responds well to training. If an English bulldog decides they don’t want to do something, they won’t. So, make sure they know who the boss is when training them.

These dogs are very protective of their owners. Although they aren’t aggressive or watchdogs, the way they walk and look will scare any intruder. They aren’t combative, but, if they feel threatened, they can use their strength, and they’re very strong.

English bulldogs can be lazy, since they like to sleep a lot during the day. They aren’t a big fan of exercise, but you should urge them to do activities to stay fit. Also, these dogs don’t like to run, and will always prefer calm walks. Additionally, they don’t like the heat, and are very scared of loud noises.

With English bulldog behavior, there are some ways that they don’t show the best manners. Even though they don’t bark, they make other kinds of noises: snorting, growling and snoring. In addition, they drool, especially after eating or drinking.

Another negative quality is that they have lots of flatulence. Because of their short faces, they swallow a lot of air when they eat, and have to get rid of that air in some way. However, if you change their diet, this can improve.

Horror Films Have a Fan Who’s an English Bulldog
What's true is there's at least one English bulldog who's highly entertained with TVs. The most amusing part is he's a fan of horror films. Read more »
Link copied!
Interesting Articles
Dogs
Gordon Setter: The Most Beautiful Pointing Dog