Home » Breeds » Dogs » Have You Met The Tallest Dog in The World?

Have You Met The Tallest Dog in The World?

Dogs have set some incredible records. Breeds of all shapes and sizes have entered the record books for various skills and attributes. 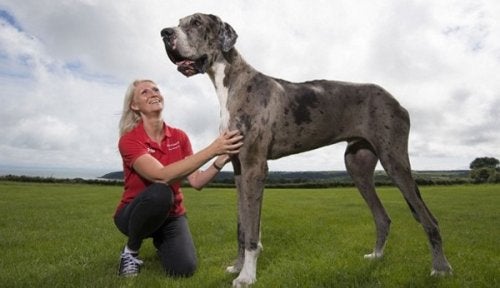 Major, a Great Dane who’s just over 4 feet tall, is waiting to be officially declared the tallest dog in the world according to Guinness Records.

The truth is, on an individual level, this breed of warmhearted giants seems to be unbeatable in this area. The previous record was held by Zeus and George, both Great Danes that have already passed away.

Major resides in Penmaen, in South Wales, in the UK. He’s competing with two other dogs of the same breed: Freddy, from southern Essex, England, and Rocco, from the state of Nevada in the United States.

It seems Major is a few inches taller than the rest, and so, in all probability, he’ll soon be proclaimed the winner of this Guinness Record.

The animal, which boasts a length of 7 feet from head to tail, sleeps on a bed built especially for him with a king size mattress. His diet is based on chicken and a little rice.

Brian and Julie Williams are the owners of this beautiful Great Dane, who is about to turn 4 years old. They say that although its large size can be intimidating for both people and animals, Major is so sweet that he wouldn’t kill a fly.

On an individual level, the Great Dane breed holds the Guinness Record of being considered the world’s largest dogs. Major is waiting to be officially proclaimed the largest dog in the world. Zeus and Giant George also achieved this record.

Great Dane Zeus holds the title of world’s largest dog as of today. That is, until Guinness officially proclaims Major as the next record holder. Zeus was also a Great Dane and died in 2014, some days before his sixth birthday.

In addition, Zeus was a kind of local celebrity. He made frequent visits to schools and hospitals as a therapy dog. He loved bringing joy to children and the sick.

In 2012 Zeus had dethroned Giant George, another Great Dane living with his human family, David and Christie Nasser, in Tucson (Arizona, United States).

Giant George had a height of 3.5 feet and a length of more than 6.9 feet. Guinness Records crowned this big fella in 2010.

Giant George also became famous through a book written by his owner: “Giant George: Life with the World’s Largest Dog“. In addition, he was also invited to some popular TV shows (like Oprah Winfrey’s) and had his own website, a Facebook profile and a Twitter account.

The beautiful giant died in 2013 when we was almost 8 years old.

A distinction all doggies aspire to have

We know that Great Danes don’t usually have a long lifespan. Unfortunately, this happens with all the big-sized breeds. This is unlike breeds of a lesser size, which tend to live longer lives.

In the case of these record-beating giants, it hasn’t been possible to explain the cause of their great size. Some people believe they could suffer from a pathology similar to acromegaly, a rare human disease.

Do dogs really care about holding records or not? Probably not! But the truth is that these dogs’ owners care for them and love them very much. And that, without a doubt, is the best prize that dogs of any size can receive on a daily basis. 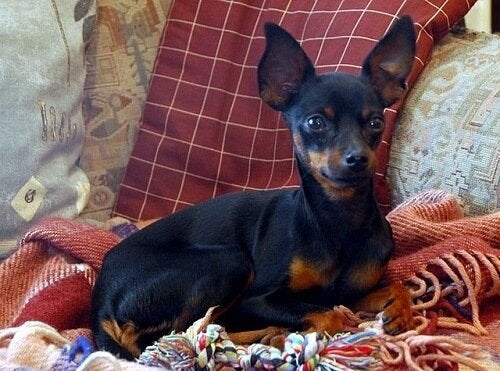 The Prague Ratter: The Smallest Dog in the World
The personality of the Prague Ratter is very lively and active. They have a lot of energy, they're brave, and they're always willing to play. Read more »
Interesting Articles