Home » Breeds » Dogs » The Importance Of Early Stimulation For Puppies

The Importance Of Early Stimulation For Puppies 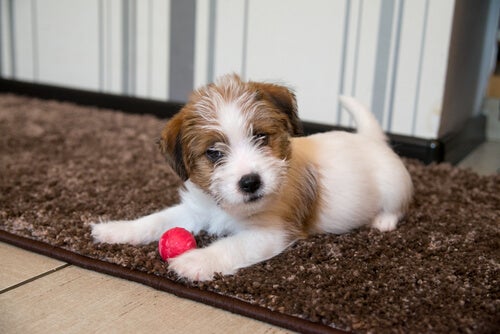 Below, we lay out some simple techniques to help you bring up your new best friend in the best possible way: with early stimulation.

Early stimulation in puppies: what is it?

Apply these techniques to optimize puppies’ learning skills. And, watch as they learn to respond to different stimuli. When they are old enough to begin active service, they will have a greater disposition to continue learning.

But early stimulation in puppies is not just about teaching them commands or tricks. It is essential if we want to teach them how to live in society. And, it helps develop their sense of self security and ability to face external stimuli.

Benefits of early stimulation in puppies

– Improves the strength and resistance of the cardiovascular system.

– Increases tolerance to stress and ability to work under pressure.

Is early stimulation in puppies safe?

These exercises are painless and safe, and have been developed by specialists to meet exacting specifications. However, putting them into practice requires extreme care, so as not to expose the animal to any possible health risks.

Early stimulation in puppies means that the animal has to go out and be exposed to various different stimuli. He or she will still not have the full range of defenses fully developed, and will not have had all the necessary vaccines – this means the exposure must be strictly controlled so as not to damage the puppy’s health.

During the first four weeks of life, experts recommend introducing puppies to other dogs. Or, maybe members of their own families. But, this is only the case if other dogs are vaccinated and wormed. It is important to avoid contact with unknown pets. Or, avoid those that have not followed a strict health plan.

Walks in the early days should be short. And, seek out calm and controlled environments. Ideally, keep the puppy from smelling the urine or feces of any other animal.

However, being over-protective is not very productive. This applies to training and early education. That’s why it’s not a good idea to carry your dog during walks. And, you should try to avoid allowing any fear you may be feeling about the situation to be transferred onto the dog. A sense of risk is essential if you want the puppy to build up its self-confidence and sense of security.

The following early stimulation exercises are used by the US military to train puppies. The objective of this training regimen is to encourage animals to develop self-confidence from their first weeks of life, without risking their health. Because safety is at the core of this method, these simple techniques don’t rely on external exposure.

They can be put into practice at home very easily, as long as you take great care not to hurt the animal. For the best results, complete the exercises once a day during the puppy’s first two weeks with you.

Before beginning this exercise, place a towel in the refrigerator to cool. The exercise consists of placing the puppy’s 4 legs on the towel for five second bursts. During the exercise, it’s important not to obstruct the puppy’s movement.

You should start by holding the puppy in one hand. Then, use a swab to stimulate each of its four paws in turn. The stimulation should last between three and five seconds.

This is the first positional exercise, and should be carried out for no more than 5 seconds at a time. It is very simple: just hold the puppy firmly with both hands and keep its head perpendicular to the ground.

This is very similar to the first exercise. Hold the puppy very firmly with both hands, and keep its head pointing down. Again, you should do this for no longer than five seconds at a time. As we see, these exercises don’t have to last a long time – the most important thing is that you do them consistently, and with authority.

This is the last positional exercise. Hold the puppy with both hands, with its back is resting on your palms. Do this for between three and five seconds.

Early stimulation will allow your new furry friend to prepare for training from its first days, and start on the path towards better behaviors in adulthood. Investing in the education of your puppy from the very start is essential if you want to share a happy life together.