Is It True That Dogs Can Sense Fear?

If a scared person tries to run away from a dog, it's possible that they may attack due to the person making sudden movements. Is it true that dogs can sense fear? 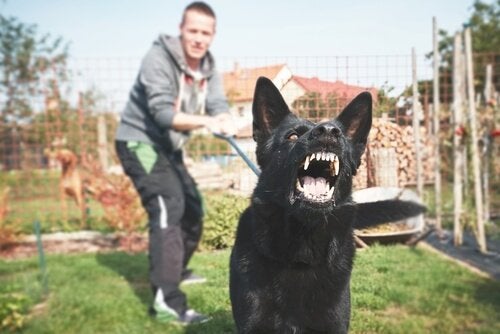 Surely when you were younger your parents once told you: “Dogs can sense fear, don’t let them see that you’re scared.” People usually thought that if dogs knew they were scared of them, they’d get bitten. Is that really true?

Is it true that dogs can sense fear?

Your parents’ warnings weren’t so far-fetched. Everyone knows that a dog’s sense of smell is amazing. They use it as a way to communicate with their peers and their environment. Using this sense, they can recognize the sex of another dog, as well as any other information that can be useful to them.

Is fear part of that information? Apparently, when you’re scared, adrenaline rushes through your body.  That’s why many people think that dogs can sense fear.

It’s believed that they can use the pheromones to detect certain things, including the flow of adrenaline. However, science shows that this isn’t true. Experts conducted studies between dogs and people that are afraid of dogs, but the dogs continued to have the same personality.

If the dog is calm, friendly and playful, even when faced with someone who’s afraid of them, they will continue behaving the same way. It seems like no matter how much adrenaline rushes through the body, dogs cannot detect it through smell.

Will a dog attack me if I’m afraid

There have been cases of dogs attacking people who are afraid of them. However, that was simply because the dog was aggressive, or because they were trained to attack intruders.

In fact, a study carried out at the Department of Veterinary Medicine of Cornell University, showed that the majority of dog attacks happen to animal lovers. They are more trusting of dogs and think that they’re all friendly and sociable.

Yes, sometimes we trust them too much, we think that nothing will happen, and we don’t follow the normal steps before greeting or petting a dog. There are also the mistakes that people who are afraid of dogs make. What should you if you’re scared of them? Run.

If a dog chases you, it’s not because they can smell your fear. It’s because of your sudden movements while trying to get away from them, and they’ll try to stop you.

If you try to run, they may attack. Of course, this is less likely if the animal is affectionate and friendly. So, if you’re faced with an aggressive dog, it’s best to continue on your way as if the dog was never there.

If a dog attacks you…

Keep calm. This is the first thing you should do. If you make a sudden movement, shout or hit the dog, he’ll be more likely to become aggressive. To keep it from attacking, put something between you and him, but stay as calm as you can.

Don’t look it in the eyes. Dogs take eye contact as a threat. This will just fuel their desire to attack you. The best thing to do is look the other way and act as if nothing has happened.

Give them a command. If you already know the dog, he’s likely not going to attack if you tell them “no” or “stop.” This may also work even if you don’t know the animal at all. Keep in mind that these are very basic orders that all dog owners usually teach their pets. They may obey it.

Remember, even if you love dogs, you cannot always trust them. To avoid any problems, let them first smell your hand, give them time to continue smelling it, and let them be the one that approaches you. This will help you avoid any unexpected attacks.