Pulling On The Leash: Health Consequences For Your Dog 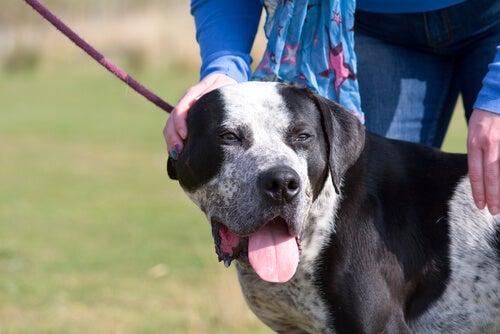 When walking our dogs, many of us problematically pull on the leash. In fact, it’s very common to walk down the street and see dogs walking their owners, rather than the other way around. But it’s very important to train your dog out of the habit of pulling on its leash during walks. This isn’t just for the comfort of the owner. Also, it preserves the health of the dog. After all, the pressure on the dog’s neck from the collar can actually lead to some serious health problems.

The importance of the neck

When the dog pulls on the leash, the collar tightens around its neck. The neck is a very sensitive area. It has large numbers of nerve endings. And, it has several very important glands and arteries. In fact, the list goes on. And that’s not to mention that it’s here that we find the esophagus and the trachea. Prolonged pressure on these areas can damage them. Basically, these consequences affect your dog’s health.

This is the first and most important reason why owners should use a harness instead of a collar when walking their dogs. If the dog pulls when it’s secured by a harness, the pressure is distributed throughout the chest and sternum. These are bones, rather than soft, fleshy parts.

Back problems caused by leash pulling

Dogs that pull on the leash also almost always have back problems. This is because the pressure of the collar on the vertebrae at the top of the neck can damage the rest of the spine. This means that practically all dogs that have not been trained to walk without pulling on the leash. As a result, they have a strained posture. Many suffer from back pain, or other related muscular problems.

If the owner also gives the odd pull to correct them, the pressure from the collar goes directly to the nerve endings in the neck. As we have said, the important nerve endings that are found in the neck are connected to nerves that run throughout the entire spinal cord. This means that any damage to these nerves will cause cramp and pain that affect the entire spine. Then, they branch out to all the extremities.

In addition to housing very important nerve endings, the neck is also home to some key hormonal glands, such as the thyroid. Occasional or constant pressure around these glands will cause them to stop working properly, generating serious issues for the general health of the dog. In addition, the lymphatic, circulatory and nervous systems may be affected, and autoimmune diseases may occur.

There are also many other health issues that can occur as a result of leash pulling. The most obvious are respiratory problems, which may become apparent thanks to a chronic cough. This happens because the trachea is constantly under pressure, meaning that the dog cannot breathe normally when it pulls. This may even mean that the brain receives less oxygen that it should, and the trachea can be crushed.

Damage may also be apparent on the skin itself: irritation, pain, wounds or rashes due to the continued rubbing of the collar.

Some owners say that pulling on the leash is a behavioral problem. But this does not take into account the fact that other behavioral problems can, in fact, result from pulling on the leash (rather than the other way around). As we have seen, there are many different health problems that can appear: muscle strain, hernias, breathing difficulties, and even hormonal disorders. All of these cause pain or discomfort in any body, including that of your dog.

A dog that is in pain is very unlikely to be able to behave well. Aggression toward people or other dogs is often related to pain. Bad mood, irritability, and any number of other behavioral issues can also be related to physical pain.

For example, it is common for dogs that cause damage to the house, refuse to obey commands or don’t allow themselves to be touched to be experiencing some kind of discomfort or pain that has been left untreated. In some case, uncontrollable barking can be another sign of unaddressed pain.

A dog that pulls on the leash will also commonly have trouble relating to other dogs. He or she will be unable to carry out greeting rituals in the normal way, which may cause negative reactions in other dogs. This may sometimes result in what seem like small fights – but over time, your pet’s relationships with other dogs in general will deteriorate, and may lead your pet to behave aggressively with all dogs.

Everything we’ve talked about so far applies to all normal collars. But these health problems multiply when we’re talking about spiky collars, chains, choke collars, and electric or anti-bark collars. In fact, such collars have even been banned in some parts of Spain. Why? Because: Simply by wearing them – even without pulling on the leash – the dog will be in pain.

So, the dog doesn’t even need to pull on the leash to be in pain. As soon as they wear one, they begin to cause pain.

To reiterate, it’s possible that a dog that pulls on the leash with a fixed collar may contract a health problem. On the other hand, a dog wearing a choke collar will inevitably suffer them.

So, teaching your dog to walk without pulling on the leash is not difficult. If you don’t know how to do it yourself, contact a dog trainer who employs positive reinforcement techniques. And, definitely avoid trainers who encourage choke collars and forcible training. The expert trainer will be able to teach your dog the proper way to walk. So, you’ll avoid the dangerous leash pulling that will end with a trip to the vet.