Today we want to tell you all about a giant dog breed you've probably never heard of before. Stick with us to discover all about the Anatolian Shepherd Dog. 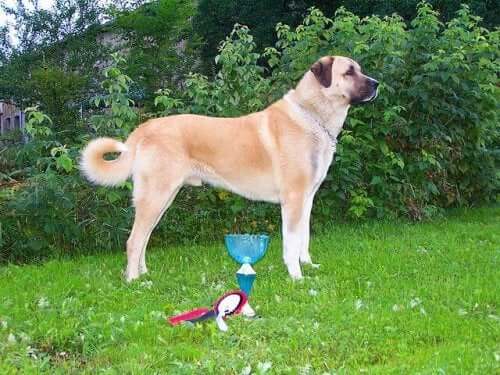 If we had to list all of the different dog breeds that exist in the world, it would be a difficult task. The truth is, the number of breeds that we’ve never heard of before is constantly growing. Today we want to tell you more about one of them – the Anatolian Shepherd Dog.

This dog seems to have come from another era, as its origin goes way back to ancient times. If you want to learn more about its ancestry and history, stay with us. You’re really going to enjoy today’s article.

What you need to know about the Anatolian Shepherd Dog

As the animal’s name indicates, the Anatolian Shepherd Dog goes back to Anatolia – or the region we know today as Turkey. In fact, the Turks consider this breed to be a national treasure, a symbol of their heritage. This canine breed is said to trace all the way back to the Roman Empire.

Despite being sure of this fact, there are no written sources from this period to prove it. Therefore, there are three different theories about the breed’s existence. Or, to be more specific, experts believe that the Anatolian Shepherd Dog is the result of a mix between three different canine breeds:

And this, apparently, is how the Anatolian Shepherd Dog came into existence. Originally, these dogs worked as guardians and accompanied the armies of the time in order to pastor their flocks while they conquered new territories. These flocks were used to feed the soldiers. In other words, traveling soldiers had to bring live sheep and goats along with them.

After this, with the conquest of the Roman Empire, this dog began to spread far and wide.

The characteristics of the Anatolian Shepherd Dog

The Anatolian Shepherd Dog falls into the category of giant dog breeds and has quite an imposing appearance. It’s tall, heavy, and very muscular, and its skin is dense and somewhat wrinkly around the shoulders.

These majestic animals measure between 25 and 31 inches in height, although this varies from one federation to another. There are some federations that allow for Anatolian Shepherd Dogs measuring up to 32 inches tall. Their weight can vary from one specimen to the next.

It’s interesting to note that these dogs possess two layers of fur. First, they have an outer layer that is impermeable and an inner layer that protects them from the cold. Their coloring tends to vary between shades of sand and grey. However, sometime federations allow them to have a white spot on their faces.

As for their size, it’s clear that they need a great deal of daily exercise in order to keep their joints in good health.

When it comes to the temperament of Anatolian Shepherd Dogs, they are very sure of themselves and are very brave. They are also powerful, protective, and seem to have the ability to keep their emotions in check when in difficult situations. What’s more, they’re great for warm climates.

“The world would be a nice place if everyone had the ability to love as unconditionally as a dog.”

Despite the fact that they have always been bred in rural areas, these dogs are very used to being with families. Therefore, they are great family dogs and are protective of their own.

Health and other issues

The Anatolian Shepherd Dog tends to enjoy very good health. In fact, experts consider them to be one of the longest living animals, reaching between 12 and 15 years of age. However, it’s important to know that some specimens are prone to lipomas, which are small benign tumors. These fatty lumps pose no danger.

Their fur requires no special care, but it’s still important to brush them during seasonal changes to get rid of dead hair.

So there you have it! The Anatolian Shepherd Dog is a fascinating and versatile canine that makes for a perfect family pet. So, now that you know more about this breed, maybe you would like to have one?