The Different Hunting Dog Breeds and Their Qualities

The qualities of these dogs are based on discipline, agility, intelligence and perseverance. Clearly, they must have at least one of the senses involved in this sport particularly developed. 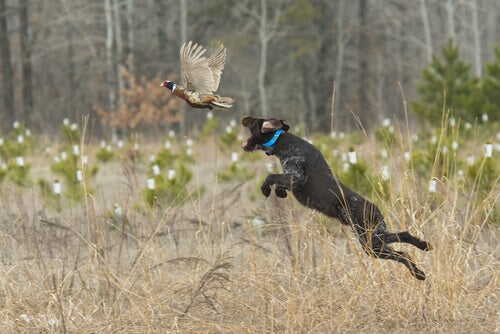 Hunting has always been a sport that dogs have been used in for several types of tasks. Do you know the different hunting dog breeds? What must a dog have in order to be suitable for this sport? Let’s see.

How a hunting dog should be

They are many diverse breeds, but when it comes to personality and other factors, they must have several aspects in common. Here are a few:

The most common hunting dog breeds

These are the most widely-used hunting dog breeds around the world. However, this doesn’t mean that specimens of other breeds can’t act as hunters once properly trained.

The original Fox Terrier from England was the breed used for centuries for fox hunting. Despite not being a very big dog, it has certain personality and character traits that make it suitable for this task.

Thus, its stubbornness transforms into perseverance, and, despite its size, it shows courage worthy of mention. Also, its legs are long and its body light, which makes it very agile.

It’s also a small dog, but its sense of smell has made it ideal as a sniffer dog. They can chase small animals for hours as they have a seemingly inexhaustible amount of energy.

They’re very stubborn and have problems with authority. So, if you want to have one of these dogs for hunting, it must receive proper training.

This has been one of the hunting dog breeds used for this specific purpose. Its athletic physique, together with its good sense of smell, make it one of the most sought-after hounds by all lovers of this sport.

The Hungarian Vizsla has a lot of energy. Also, due to its size and character —it gets stressed easily— it needs a lot of exercise. Therefore, hunting isn’t only a job, but something very beneficial to its health.

The agility of this dog is obvious if we only look at its long legs and its athletic demeanor. It’s thin but strong, with pronounced muscles and great intelligence. In addition, it’s perseverant and has a highly-developed sense of smell.

These are the most common hunting dog breeds used around the world. Surely, there are many more, but these, due to their personality and good work, have undoubtedly earned their place on this list.

Is Your Dog a Good Hunter?
If your dog is a naturally good hunter, it might constantly focus on sniffing and scoping out other animals. Here are some tips to see whether yours is. Read more »
Link copied!
Interesting Articles
Dogs
The Characteristics and Care of the Bullmastiff