14 Animals With a Highly Developed Sense of Smell

Not long ago, a group of scientists studies how genes codify olfactory abilities, allowing them to know which animals have a more developed sense of smell. 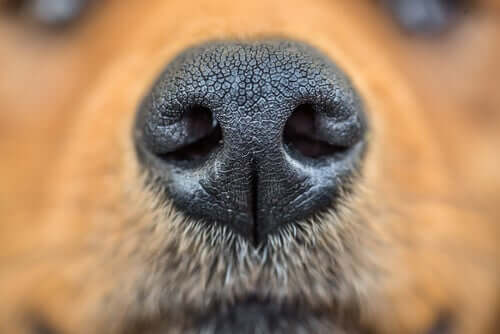 Smell is one of the many senses that animals possess, and many have a very highly developed sense of smell. Through this sense, their bodies can detect and analyze molecules that are transported by air. These particles enter through their nasal passages to the olfactory bulb, where they find proteins that receive smells. And, from there, the information travels to the brain.

Each type of receptor can detect a substance. But, the combination of various receptors makes it possible to smell an infinite number of substances. When animals possess a highly developed sense of smell, it’s thanks to the great number of genes that codify different receptors proteins.

A recent study performed by researchers at the University of Tokyo analyzed the genes responsible for smelling in 13 placental mammals. The results were surprising.

The African elephant (Loxodonta africana) is the animal with the most highly developed sense of smell. This mammal inhabits at least 37 countries in sub-Saharan Africa. What’s more, since it’s a migratory animal, it can live in many different habitats… from dense forests to beaches.

Today, the distinct populations of this species find themselves fragmented. However, thanks to the work of conservationists, it seems like their numbers are increasing.

According to the above-mentioned study, the African elephant possesses around 1948 different genes that are responsible for the configuration of smell receptors. This highly developed sense of smell may have to do with the animal’s long trunk, which it uses as a hand. The receptors are not in the elephant’s trunk, but rather in its head.

However, the animal uses its trunk to search for food. And since the tip is so far from the animal’s eyes, elephants need a good sense of smell. At the same time, this powerful sense of smell may also have to do with their good memory.

Rats and mice are nocturnal rodent mammals. In general, animals with this lifestyle have poor vision and a highly developed sense of smell. This may be because, in the dark, sight becomes less important. Rather, nocturnal animals depend more on other senses, such as hearing, thermal reception, and their sense of smell.

Rats have 1207 olfactory genes, while mice have 1130. In fact, there’s even a rat species, the Gambian pouched rat, that can be trained to track and find anti-personnel landmines.

Cows, our next animal on our list of animals with a highly developed sense of smell, have 1186 olfactory genes. Their sense of smell is so great that they can detect smells that are located at a distance of over 6 miles. This quality is very useful for animals that are herbivores and need to detect their predators even when they’re far away.

Today, due to domestication some 10,000 years ago, starting with aurochs (Bos primigenius), cows are protected by human beings. However, in the past, they needed this type of strategy in order to avoid predation.

Just like in the case of cows, horses also need a good sense of smell, since they too are prey. These equines possess 1066 olfactory genes, and their sense of smell allows them to even find water that’s below the surface. This is very useful for horses that live in the desert, as they need a great deal of water in order to survive.

What’s more, these animals use their sense of smell to make friends and detect mares in heat through urine and manure.

We’ve all heard talk about the sense of smell in dogs, so it should be no surprise to find them here on our list. However, you might be surprised to discover the dogs have only 811 olfactory genes. This may not seem like a lot in comparison to elephants. But, if you keep in mind the fact that humans only possess 396, dogs have over twice as many.

The particularity of dogs is that, despite having fewer genes, their olfactory receptors are incredibly sensitive. Therefore, they’re able to differentiate between smells with exactitude. In fact, they can even detect the earliest stages of cancer.

Guinea pigs, which are rodents, are popular domestic pets. At the same time, they’re commonly used as animal models in laboratories. They come from Peru, where they also make up part of the local gastronomy.

Guinea pigs possess 796 olfactory genes and use their sense of smell to recognize one another. For this reason, if you have a guinea pig as a pet, it’s important not to wash your hands just before touching it. Otherwise, it won’t be able to detect your natural scent.

More animals with a highly developed sense of smell

To close, we’ll leave you with a list of 7 more animals with a highly developed sense of smell, from highest to lowest, so you can research them on your own:

Interesting Facts About Cats’ Amazing Sense of Smell
If you have cats at home, you must have already noticed how they smell everything around them. Find out more about their sense of smell... Read more »

Link copied!
Interesting Articles
Mammals
What Is an Animal Generation?

Animals
What a Dog Feels When it Looks at You

Any dog owner will agree that establishing eye contact with their dog is more than just a sensory experience. It’s…