The French Bulldog, A Caring And Intelligent Dog 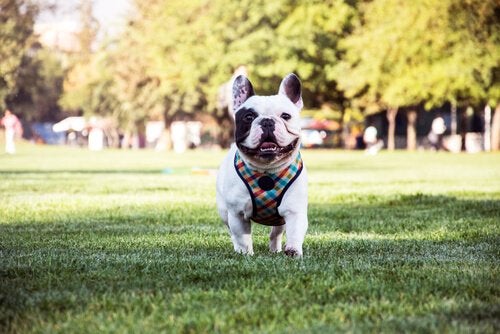 The French Bulldog is a small dog of English origin. Its temperament and traits make it perfect for people who live in small apartments.

The Curious English Origin of the French Bulldog

The origin of this breed is very curious because as strange as it may sound, the French Bulldog comes from England. It’s related to the English Bulldog and descends from Mastiff type breeds.

During the 19th Century, people didn’t have that much awareness about animal cruelty as they do today. Many breeds were bred to fight. People who liked the English Bulldog, but weren’t interested in dog fighting, started breeding smaller bulldogs which weren’t as successful, and ended up becoming a low class pet.

During the industrial revolution, many British people migrated to Europe and took their little Bulldogs with them and this breed became very popular in France.

The breed was disappearing in Britain while it prevailed in France. As of that point, the breed has been exported all over the world.

The French Bulldog makes an excellent pet for people who live in small apartments. This is because they’re small, calm, not very noisy, easy to train, and need relatively little exercise.

The main features of the French Bulldog are its relatively large head, peculiar bat-like ears, and short snout. They’re a brachycephalic breed.

Their fur is short, sleek, and lies flat on their body. They’re normally brindle or have a deer-like color with few white patches over their body, head, and feet.

Caring for a French Bulldog

One great advantage of caring for a Bulldog is that they’re really easy to groom. Brushing his coat once a week should be enough to keep his short hair clean and shiny. As for his nails, it’s a good idea to cut them once a month. If you’re not sure you know how to do this, you can always ask your vet for advice, or go to a professional dog groomer.

The main health problem that French Bulldogs relate to their short snout and respiratory system. A French Bulldog will snore a lot and get tired easily. Therefore, you should exercise them too much and take them for long walks to improve their cardiovascular capacity, without running.

Premature degeneration of their spinal discs is another health problem of this breed. The symptoms are having a stiff neck, hobbling, and loss of sphincter control. Like most problems, this can stop or at least get better with an early diagnosis. Giving birth is also complicated for this breed due to the relatively large size of their heads.

So, due to all of these health problems, it’s a good idea to go to the vet on regular basis.