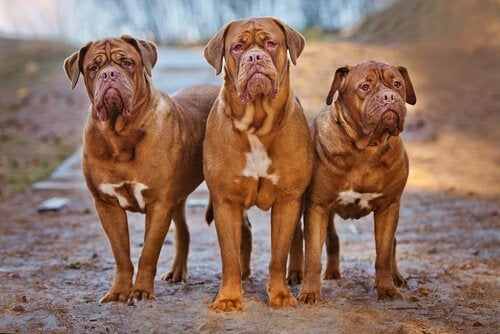 The guardian of the family

The French Mastiff is today one of the best-known breeds of dogs worldwide. Their famous loyalty and devotion to their masters make them ideal for families of all kinds. Today, we’re going to talk in a little more depth about these great dogs, and some of their characteristics that make them stand out.

For the past 200 years or so, the French Mastiff has been a popular breed and has been used in many different trades over the course of that time. These dogs, with their majestic look and imposing appearance, have a unique composure and face. They certainly stand out from the crowd.

French mastiffs were originally part of the general mastiff breed, which were used mostly to protect cattle. However, over the years breeders began to design French mastiffs more for hunting.

Previously, there were three sub-varieties of this type of dog, each with its own distinct characteristics: the Paris, the Toulouse and the Bordeaux. Today, though, only the Bordeaux variety still exists, because it was spread most widely over the world after being shown at a dog breeding fair in the French city of Bordeaux in the 19th century.

The main thing that sets this breed apart is its large head, which is notable even in comparison to its very large body.

Their bodies are characterized by the following normal features:

In short, the French Mastiff is a very powerful dog traditionally employed as hunters, with a strong jaw that’s specifically designed to hold onto prey. Nowadays, though, these dogs are mostly used to guard houses, although in some cases they still work as livestock guard dogs.

The Temperament of the French Mastiff

We don’t blame you if the appearance of this breed of dog scares you. But the truth is that the French Mastiff is not an aggressive dog — in fact, it’s quite the opposite. They are calm animals, affectionate with their owners, although it may not always show in front of strangers.

They are very loving dogs and great with children.  In fact, they are very social and like to be included in family activities. They are also generally quiet, and rarely bark for no reason. When they do make noise, it’s probably for a good reason, like if they hear a burglar or sense some other danger.

So while they may look fairly cool and collected in front of strangers and other dogs, they are actually paying attention and making sure that their owner is safe. However, they aren’t prone to jealousy like some other breeds.

From a very early age, French Mastiff puppies should be taught about what constitutes good behavior, and what does not. They are very intelligent and learn easily, but they do have a very stubborn character that can end up interfering with their training.

The best approach is to try to teach your dog good behavior with firmness and kindness. However, if you’ve never trained a dog before, we would recommend starting with another breed, such as a German shepherd.

The large skull of the French Mastiff is what is called brachycephalic: this breed of dogs is vulnerable to respiratory problems because of their short snouts. But don’t despair; it’s usually a very mild condition. However, if you feel it’s getting worse, you should check in with a qualified vet as soon as possible.

The French Mastiff generally lives a long time, some even living for over 20 years. This means that it’s normal for them to suffer from conditions related to old age. These include joint problems as well as hip and shoulder dysplasia.

These dogs often have skin problems too. The folds in the skin on their faces, for example, are an ideal breeding ground for moisture and fungi. That’s why it’s highly recommended that owners clean these areas daily to avoid infections and the development of scabies.

Finally, French Mastiffs also tend to have eye problems. It’s a good idea for owners to take their dog for a monthly check-up with the vet to check their vision. Some other conditions that are common in this breed are hypothyroidism, epilepsy and, less often, retinal atrophy.

As we’ve seen, the French Mastiff is a great dog to have around. However, it’s not without its challenges, and not only in terms of training but also of care. Sadly, it’s common for these majestic dogs to have life-long health problems.

Link copied!
Interesting Articles
Dogs
A Dog’s Origins According to its Ears