Despite the fact that this German breed is a shepherd, it wasn't recognized until 2011. In addition to being lively, hardworking and easy to train, these dogs are medium sized. 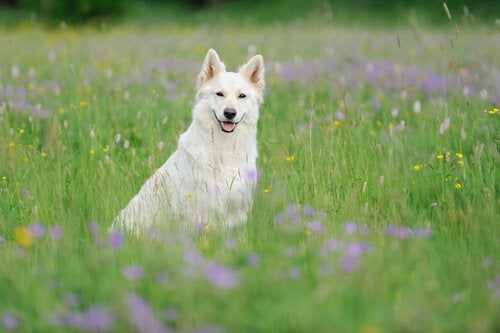 They look like an albino German shepherd, but the Swiss White Shepherd’s fur isn’t the outcome of a genetic mutation, which is quite common for this breed with unique fur. This breed was used in creating the German Shepherd. So you know that in addition to their beauty, they also are smart.

History of the Swiss White Shepherd

For some time, it was argued that the Swiss White Shepherd was just a white version of the German Shepherd. However, it has been shown that this breed is actually older.

There is evidence that the first Swiss Shepherds appeared at the beginning of the 19th century. However, they were in Northern Germany, not Switzerland. However, Switzerland has been defending this breed’s recognition as a unique and original breed, as well as for its official registration.

The great expansion of the breed took place in North America. In the 1970s, the first specimens came to Canada. There, they gained a lot of popularity and, finally, defined themselves as a different breed. After spreading throughout almost all of North America, they returned to Europe.

For a long time, many have tried to devalue this breed, treating it as if it were a worse version of German shepherd. However, no one could deny the fact the Swiss Shepherd’s DNA was used to create the German Shepherd.

So, finally in 2011, the FCI admitted that the Swiss White Shepherd is its own breed. Lovers of this breed had to spend decades promoting it and do everything they can to register it until they were able to make it official.

Traits of the Swiss White Shepherd

The Swiss White Shepherd is classified as a medium-sized breed. Males can reach between 60 and 66 cm long are slightly more bulky than females that only measure around 55 to 60 centimeters.

Regarding their weight, there is also a noticeable difference between male and female. The ideal weight for a male is 30-40 kilograms, while the female is 25-30 kilograms. So, we can say that they are a muscular and corpulent dog of medium size, but they are also slender and styled.

These dogs have long triangular that are slightly rounded on the tips. They point upwards and forward as if they were constantly alert. They have dark eyes and pupil. If this breed was albino, than their eyes would have a pinkish color.

Their fur is completely white. There are two varieties of hair: medium long and completely long. In both cases, this dog has a double layer of hair: the bottom layer is dense and hard while the outer layer is silky and smooth. Their face, ears and the front of their legs have shorter hair.

Their tails are shaped like a saber and pointed at the tip. They keep them low when they are resting, almost straight or slightly curved. When they are on alert, they lift it, but never higher than the height of their back.

Behavior of the Swiss White Shepherd

When it comes to their behavior, it’s quite similar to the German shepherd’s. They are alert and lively dogs that make great companions, but are also valuable for work.

This along with their agility and intelligence, make them great competitors in canine sports like agility. They are attentive and alert dogs, always willing to learn and are easy to train.

With such an intelligent dog, it’s important to educate them by using a positive teaching method in order to accelerate and facilitate their learning. A traditional education based on force will only result in behavioral problems.

The Swiss White Shepherd is prone to hereditary diseases that are common to other breeds of shepherds and dogs of that size: gastric torsion, elbow or hip dysplasia and heart disease. Also, they seem to have a higher possibility of food allergies and dermatitis.

As for their hair, because of its length, you should give them a good brushing at least a couple of times a week to remove any dead hairs and prevent skin problems.

Since they have a double layer of hair, you shouldn’t shave them during the summer. Although it may seem like they are suffering from the heat, they create their own layer of air that refreshes them.

Lovers of the Swiss White Shepherd have fought for decades to make that this be breed is no longer labeled as the German shepherd’s younger brother. Since then, it has gained a lot of popularity due to its extraordinary beauty and wonderful personality.