What to Do If Your Child Is Afraid of Dogs

Most children love dogs, but there are some who are terrified of them. If your child is afraid of dogs, here you'll find some advice on how to help them. 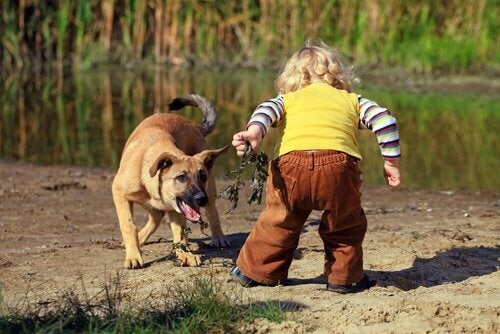 Most children love dogs, but there are some who are simply terrified of them. If your child is afraid of dogs, here you’ll find some information and advice that you might find useful in helping them overcome their fear and improving their relationship with your four-legged friend.

What causes children to be afraid of dogs?

Though it might be difficult to believe, a fear of dogs in children can occur because of the things we say. In the same way that they develop a fear of monsters because of phrases such as, “If you don’t behave, the bogey man will get you”, you might have inadvertently said something similar in reference to your dog.

For example, “do as you’re told or the dog will eat you”, or “don’t touch it or it’ll bite you”. All these expressions might have created certain prejudices towards dogs in your child’s mind.

All this will make your child the perfect candidate to develop a fear of dogs when it gets older. However, psychologist Begoña Gallego explains that if you want to change your child’s opinion of dogs, you need to change the way you talk about them.

Dogs can often sense when a child is afraid of them. Their incredible sense of smell allows them to detect pheromones from huge distances. So, if your child is afraid, your dog will be able to feel it, and might feel scared too. It’ll start to think of your child as a threat, and might start to act aggressively towards it. This will only make things worse.

Fear and phobia: what’s the difference

Fear and phobia are two very different things. Fears have a logical cause. For example, if your child has had a bad experience with dogs, it’s logical for it to be scared of them and not want to go near them. This is easily resolved by buying a young puppy, and getting your child involved in caring for it as it grows up.

Phobias are something very different. They can appear for no obvious reason, and these irrational fears can appear even by seeing a photo of the animal or object.

A psychologist should treat extreme phobias. However, you could also try curing a phobia of dogs yourself by buying a puppy. Puppies should awaken a protective instinct rather than fear.

How to avoid a fear of dogs in children

To prevent your children from developing a fear of dogs, you need to teach them from a young age. In this section, we’ll give you some advice on how to do it. If they’re still fairly young, and they’re already starting to develop a fear of dogs, this advice may also help you. Essentially, it involves teaching your children how to approach an animal.

Fear of Dogs: What Do I Do If My Child Is Afraid of Dogs?
Many children have a fear of dogs. In this article, we'll give you tips for helping your child overcome this fear and learn to interact with dogs. Read more »
Link copied!
Interesting Articles
Dogs
The Causes of Epilepsy in Beagles