What To Do With Respiratory Problems In Dogs?

Panting, sneezing, drippy nose, cough, and loss of appetite all may be signs that your dog has respiratory problems. If your dog has any of these symptoms, you must get them checked by a vet to prevent further complications that could lead to the animal's death 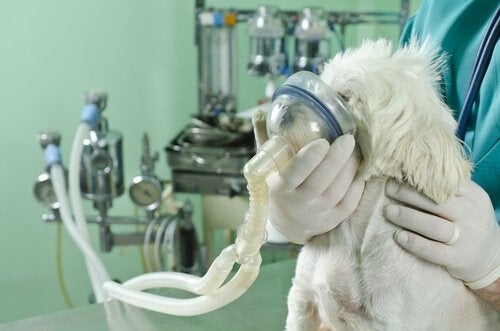 There are many dog breeds that have difficulty breathing due to their breed or health issues. There is no dog breed that’s exempt from these respiratory problems.  That’s why it’s important to know what to do in case your dog ever develops a respiratory problem.

What are the most common respiratory problems in dogs?

There’s different causes that can influence respiratory problems in dogs. Each of these conditions is related to one of the following  causes:

Respiratory problems in dogs are mostly caused by bacterial infections. However,  don’t be fooled, they can also be caused by other, possibly more serious things.

The most common symptoms of respiratory diseases in dogs are:

This symptom can appear at any time and in any breed. Although it may seem that nothing wrong with your dog, it might be serious. A cough may just be a slight throat problem or caused by a more serious illness.

In order to find out how severe your dog’s cough is, you must see how long it lasts.  If your dog has been coughing for more than a day, then it’s best to take them to a vet. Most likely your dog might have a greater problem that’s bigger than want you originally thought.

Although a sneeze might not seem like anything serious, sometimes they’re caused by stagnation in the nasal passages, and it may cause bleeding.

If you think that your dog is sneezing a lot more than usual, and with more intensity than before, then you should have them get checked by a vet.

Although a respiratory problem has no relation to the stomach, it will make your pet feel upset and possibly tired, which may cause them to lose their appetite. You’ll notice that they’re weaker than normal and that, along with not wanting to eat, they also won’t want to go outside or play.

If your dog continues feeling like this for more than a day, then take him immediately to the vet. Remember that acting quickly can often save your pet’s life.

As a general rule, when a dog has a  respiratory problem, both symptoms will appear, but not necessarily. The panting or rapid breathing and excess mucus are clear signs that something isn’t right with your pet’s respiratory system.

These are some of the most common symptoms. Your dog may even wheeze, show signs of depression, or seem very lethargic. Obviously, if your dog is having any of these problems, then you should take him to the vet.

Common respiratory problems in most dogs