Which Breeds are Water Dogs? 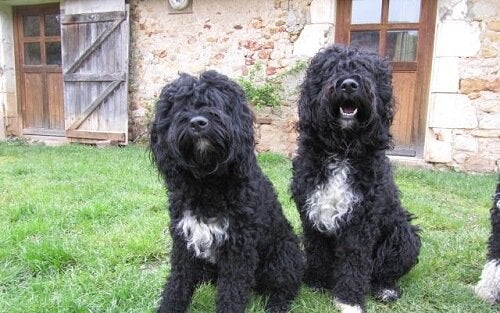 Water dogs are a group of breeds characterised by their medium size and woolly and curly fur. They tend to be used to retrieve birds from the sea or lakes. Want to know more about them? Read on!

You can easily identify water dogs because they look a bit like sheep due to their woolly coats. They’re medium-size dogs who love the water. They’re a great help in the countryside, however, they can also make good home pets if you’ve got a garden or some outdoor space. Here are some different water dogs:

These water dogs come from France and reach a height of 65 cm and weigh 28 kg (males). They’re a typical water dog with a long, curly, woolly coat, which tends to be black, grey, and brown.

The Barbet is joyful, intelligent, obedient, and the perfect companion. Furthermore, they learn very quickly and get on well with children and older people. They’re used to collect birds from water.

Originally called the American Water Spaniel, this dog comes from the United States and is not very well-known outside of North America. The first examples date from the 19th Century, but it’s not properly known what they descend from. However, we do know that they emerged around the Wolf and Fox Rivers in Wisconsin, where they were used to collect ducks on canoe hunts.

The temperament of the American Water Dog is similar to a Spaniel. As a result, they’re very active, intelligent, friendly, and always eager to please. They can also be a little destructive if they’re bored. However, they’ll protect their owner in any situation and make the perfect companion.

The Poodle is a breed that was born in the 15th Century for nobles and aristocrats. After the Renaissance they became water dogs for recovering ducks and swans from lakes and rivers. There are four varieties: large, medium, miniature, and toy. They all have woolly fur and you need to brush it regularly to stop it getting tangled.

The poodle is a joyful, active, and playful dog and is difficult to distract. They’re also methodical, energetic, and excellent with children, but you need to train and socialise them, so they don’t destroy furniture or other things around the house.

This breed originates from Andalusia. Although it was originally used as a sheep dog, it also helped on boats and in hunting. It’s believed that its ancestors were some of the Arabic breeds that came to the Iberian Peninsula in the year 711. They can have a black, beige, brown, or white coat. They’re athletic and have droopy ears.

As far as their personality is concerned, they’re faithful, obedient, brave, hard-working, and stable. They have some natural hunting instincts and make an excellent guard dog. They love to play and adore the water.

This dog comes from Holland and its original name was the Wetterhoun, from the word “Wetterhun” (water dog). They’re medium-size and grow to a height of up to 59 cm and weighing 35 kg (adult males). They have a thick curly coat which is white with black or brown patches. They have less fur on their legs, ears, and face.

The Irish Water Spaniel is one of the oldest Spaniel breeds. The current line developed in Ireland in 1830. It’s a very active dog and used to perform the work of a Retriever or other collector dog. They’re very intelligent animals and learn quickly. They’re always alert and can pull funny facial expressions. As a result, some people call them the “clown” of the Spaniel family. The Irish Water Dog gets along well with children and other dogs. It also has a curly tail and a dark reddish-brown coat.