Why are there so many dog breeds? 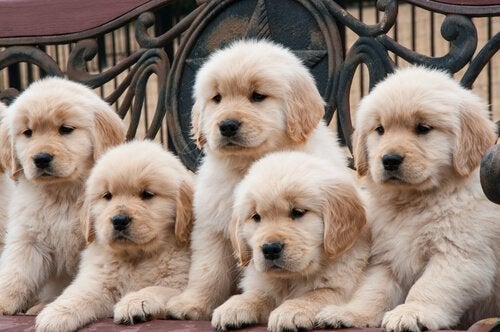 The reality is that there are many varieties of canines, and it’s normal to wonder why this genetic layout exists. Biologists believe that they have a logical answer to this complicated question. Therefore, in order to find what that answer is, we need to go back to the year 31,000 B.C.

The wolf: origin of the dog

Everything took place around 33,000 years ago. According to the hypothesis of the genetic biologist Peter Savolainen, it’s very likely that the wolf population was divided into two large groups back then.

Perhaps over time, one of the two groups started to approach human settlements in order to eat leftover food that was given to them. So, dogs were the ones who made the first move!

Savolainen believes that dogs’ friendly behavior turned out to be a quest for survival. From there, a process of mutual adaptation must have begun that lead to the domestication of canines by humans. However, how did this influence today’s highly diverse mix of dog breeds? Biologists believe that the domestication process was a key factor.

The role of humans in dog breeds

According to specialized biologists, it was humans who influenced the creation of different breeds. Perhaps this took place due to the diverse skills and training that human beings taught their dogs.

Over the generations, dogs’ body responded to these stimuli and acquired abilities, thus creating new morphological traits. It is suspected that the more training they had, the more their appearance changed.

Currently, we know that the variations are actually minimal. However, these variations enable the great biological diversity today. Even if it doesn’t seem like it, dogs have few differences as a species.

How many types of dogs exist?

It’s difficult to come up with a definite number. As with other species, a new variety can always suddenly appear and leave researchers speechless.

According to the World Canine Organization data, around 350 different dog breeds have been officially registered up until now. This organization is in charge of carrying out studies and updates on dog classification.

However, they believe that there are at least 800 types of canines that haven’t been formally registered due to several reasons. Every once in a while they add some breeds to the list.

Science considers that the dog is the mammal with the highest number of breeds on the entire planet. All these types of dogs are classified and divided into groups according to their weight and morphology.

The large amount of hybrid breeds is another reason why there are some biological subdivisions of dogs that are not on the official lists. Basically, they are dogs that have been genetically modified in labs.

They have created mixed dogs that would be impossible to get from a natural reproduction process. For example, the Cockapoo, the Puggle, the Ponski, and the Labradoodle are just a few to mention.

Everything began between Africa and Asia

Researchers believe that dogs originated in the present-day African and Asian continents.  From there, a large number of dogs breeds diversified.

Then, they dispersed towards Europe. The continent with the fewest varieties of dogs is America. That’s why it is suspected that this beautiful species is native on the other side of the planet. Apart from the that, the oldest dog on Earth was found in Belgium.

Similar to a Siberian Husky

According to archaeological discoveries, at the end of the previous decade, the Paleolithic dog was very similar to a Siberian Husky. In a matter of fact, it was much bigger than any of the dogs we see today. Only a Great Dane could compete with its stature.

There is still a lot to discover in regard to the past of man’s best friend. The good news is that this animal seems to adapt better to living with humans with every future generation. This dog’s personality is friendly, loyal, and protective, no matter their size, breed, or color. As of this moment all dogs are like that, just like they always were.