Why Are German Shepherds So Well-Balanced?

German Shepherds are an intelligent, energetic and agile breed; they have been employed to work as actors, guide dogs, rescue dog, drugs and/or explosives detectors, and as members of the military. 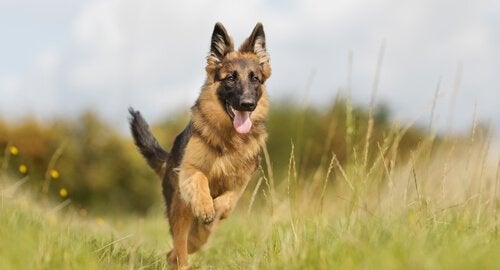 Genetic Selection and the Origins of German Shepherds

German Shepherds are a breed that appeared in the late 19th century. In Germany they needed a strong, energetic and intelligent breed to shepherd cattle. They then found a few dogs that met the physical and psychological characteristics they liked and bred them.

Through this genetic selection, the first German Shepherds appeared after just a few generations. Contrary to what is done with many other breeds, the physical wasn’t the prevailing aspect. Intelligence and character were very important factors when breeding.

They searched for smart, but well-balanced dogs; energetic, but not nervous. Since their main job was to shepherd sheep, they sought an agile, large body and willingness to work.

This genetic mashup worked so well that the people who created the breed presented it to the government as a breed capable of working as police officers. Indeed, they proved that they had the capacity to do the job and a few exemplars joined the police force.

How German Shepherds Are So Well-Balanced

Out of the former, temperament and intelligence prevailed. The criteria for allowing dogs to breed, have puppies and thus transmit genes from generation to generation was based on their working abilities. It is a breed that emphasized the animal’s psychology.

Out of the latter, however, the physical aspect has prevailed. Large dogs, with defined colors and a sloped back so characteristic of the breed, are sought.

There are dogs born with traits typical of both lines (show and work): on the one hand, they are large, beautiful dogs, with an enviable stance and lustrous fur; on the other hand, they have a good temperament.

German Shepherds have performed many other jobs other than just shepherding, the reason they were created. They often work as police dogs, in conjunction with law enforcement. But this area of work is very broad, ranging anywhere from explosive and drug detectors to border agents.

They also deal with search and rescue of people that have gone missing or have been kidnapped. They also work in military units and assist in arresting people and dealing with explosions. They are courageous and intelligent dogs.

However, they also work in cities. They are good guide dogs, although recently this job has been dominated by Labradors. Labradors are far more patient and less energetic. German Shepherds’ versatility is one of the main reasons they are so well-balanced.

As we pointed out, it has been proven time and time again that German Shepherds are also great actors, starring in all kinds of films.

In addition to Rex, a different kind of police officer, we also remember Sam. He was one of the most endearing characters in “I Am Legend” starring Will Smith. And how can we forget Rin Tin Tin, one of the first shows with an animal actor?

German Shepherds are tremendously intelligent and balanced dogs. They are beautiful, but they also have a wonderful character. This has been possible because of their breeding, which has focused on psychology and not on beauty. They have well-earned our admiration as great workers.