Hairy dog breeds are highly prized as pets by many. If you're thinking about adopting one then you should also consider that you'll also have take good care of their hair. 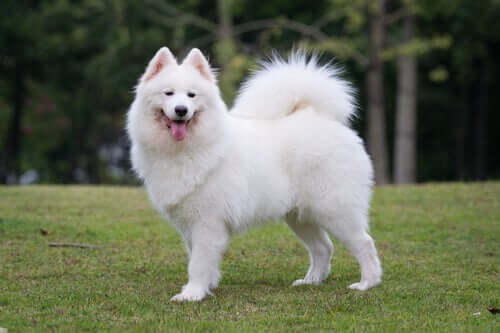 If cleaning the sofa and the carpet and having hair all over your clothes doesn’t bother you then definitely consider adopting one of these hairy dog breeds. Keep in mind you’ll have to brush them several times a week. In today’s article, we’d like to tell you about the most popular.

The most popular hairy dog breeds

It isn’t all bad news when you have a hairy dog because you’ll want to hug them all the same. The best part is that they’ll be protected from the winter cold and will be your pride and joy every time you take them out for a walk. These are some of the hairy dog ​​breeds you could adopt:

This dog is originally from Australia and looks a lot like the Yorkshire Terrier (they’re close cousins). It kind of looks like a toy animal. It measures no more than a foot and has a lot of vitality; in fact, it’s well known for it. Its silky hair is so fine that you’ll have to brush it daily to keep it from forming knots.

This is one of the most elegant hairy dogs in the world. Also known as “Persian Greyhound,” this animal’s most striking feature is, without a doubt, its hair, because it’s so silky and delicate. You can find these dogs in various colors such as gold, brown, and gray and they usually get most of the awards in beauty pageants.

The Afghan Hound is somewhat distrustful with strangers and a bit too dependent on its owners. They’re excellent animals for hunting and surveillance.

The most notable thing about this dog breed is its size (about 1 foot maximum at the withers), but its abundant woolly hair. Even though they can be sweet and chilled, poodles can be somewhat nervous and tend to bark too much.

In addition, it’s very important to maintain a proper hygiene routine and brush their fur so that it looks beautiful and doesn’t get tangled.

This woolly dog ​​is originally from Hungary and one of the many European breeds used for cattle grazing. They’re large and can measure up to 3 feet and weigh almost 200 pounds. They are sweet, resembling a mop in many ways, with very funky hair that resembles dreadlocks. Their fur is snow white, and very long and thick.

This is a very small dog that attracts attention because it looks like a cotton ball. It’s one of the most adorable-looking fluffy dogs out there. They require a lot of care, despite their tiny size. As for hair maintenance, you must cut it as often as possible and condition it so that it doesn’t get tangled or limp.

This beautiful dog of Russian origin kind of looks like a giant stuffed animal. This is because of its small face and erected ears. Generally, the Samoyed weighs about 70 pounds as an adult.

You’ll just love their sweet demeanor. Interestingly, they originally worked as sledding dogs in northern villages. People also used them as blankets to be able to stay warm at night. In addition, it’s one of the oldest dog breeds in the world.

The physique of this dog is amazing, mainly due to its woolly hair and the fact that its tail ends in a type of ball. It’s similar to a poodle, but larger; some people even believe that both breeds are cousins. In addition, their leafy curly mane is ideal for those who like to give and get hugs.

This dog is also known as Do-khyi in the Tibetan language and is a very large breed. They also have a lot of hair. Originally, people used them as war dogs and their job was to guard prisoners. Of course, this happened over 4000 years ago. Currently, we know them by their abundant coat that’s either black, gray, gold or blue, and for their large size.

9. The Bernese Mountain dog is one of the most beautiful hairy breeds

This is a bulky but not extravagant dog with a lot of hair to keep you and your brush entertained. The breed is originally from Switzerland and its coat is usually black with some white and brown areas.

This kind of dog is another very hairy one. Just the kind that we just want to hug and pamper all day. They have quite a docile and tolerant demeanor, in contrast to its scarily large size. Because of this, they’re ideal for households with children. Lastly, their fur is mostly white with some gray parts. Oh, and they have the most beautiful little faces!

Dog Breeds Prone to Having Otitis
Otitis is a very common disease in dogs. However, some breeds are more prone to suffer from this type of ailment than others. Read more »
Link copied!
Interesting Articles
Cats
The Wild-looking Serengeti Cat