Pointing Breeds: Learn More About Them

These dogs stand out for their physical capabilities and their amazing sense of smell. They make great bloodhounds and hunting dogs. 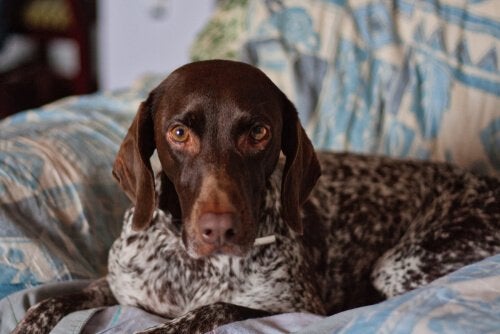 Most pointing breeds come from a European origin, so they have a shared past and similar traits. Keep reading this article if you want to learn more about them!

There are all kinds of pointing breeds and sub-breeds. of them. Many of them originated from the 19th century or earlier as hunting dogs. In this article, you can learn about 5 pointing breeds.

There are also a few pointing sub-breeds. The most well-known is the German shorthaired pointer (in the picture above) was bred in the 1800s to hunt birds and wild boars. Their main traits are a better sense of smell than other dogs, elegant appearance, extraordinary intelligence, physical toughness, and a love for water.

Since the end of the 19th century, people have also used the German wirehaired pointer to hunt birds (including falcons). They are a calm, easy-to-guide breed with a good personality. They’re medium-sized with “wiry” hair, and a short tail.

The German Weimaraner is one of the most famous pointing breeds in the world. They are an amazing hunter and retriever with short, thick, brown hair. This breed was named after a Duke.

Weimaraners have blue eyes when they’re born, but by three months of age they take on an amber tone. Another distinctive trait of these dogs is their big, forward-facing ears. They’re energetic, healthy dogs that don’t like to be home alone and need to do a good amount of exercise on a daily basis.

Vizlas have started to become very popular around the world, both as house pets and hunting dogs. They’re very active and need at least an hour of exercise per day. They have a better sense of smell than most breeds and love water. They’re Hungary’s national animal and they date all the way back to the 10th century.

These dogs have short, completely brown fur with big, forward-facing ears, and a long thin tail. They have an athletic body with long paws (especially their back paws), and a big, square head.

In ancient times, there were two sub-breeds of the Bracco Italiano. One adapted to the mountains and other to the plains. However, now they have “merged” and there’s only one standard breed. They’re show dogs with a body similar to most other bloodhounds because they have long paws, big ears, a thin tail, and a square nose.

The Bracco Italiano is different from other pointing breeds because of their fur, which is white with light brown spots and patches. Their ears and the area around their eyes is a bit darker. The specific marks they have are different with each dog.

The last on today’s list is from French origin. People first bred this pointing dog in the Pyrenees Mountains, and they’re relatively rare outside that region.

The Braque Francais is medium-sized, with a muscular body and long, thin paws. Their heads are almost entirely brown, but the rest of their fur can have small, dark spots and patches that stand out against the white fur. They’re great with kids and other dogs and can adapt well to just about any climate.

You might be wondering how many other breeds there are that weren’t mentioned in today’s article. Well, the list would be too long to mention all of them, but there’s also the Portuguese Pointer, Danish Pointer, Slovakian Pointer, and a lot more breeds of French Braques.