Schnauzer dogs originated as farm animals. Throughout the world wars, they had functions as military dogs and, even today, they serve as police dogs in various areas. 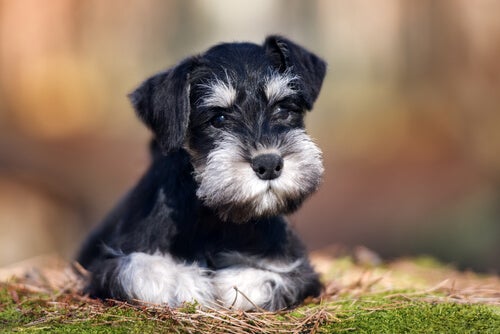 Schnauzer dogs span three different kinds of sizes: the so-called miniature, which weighs between 6 and 7 kg, the standard size, whose weight is around 14-15 kg, and the giant, which exceeds 30 kg.

This dog performs well in all kinds of functions, thanks to its robust body and its fur, which protects it from the cold and from harsh conditions.

Schnauzer dogs are strong and have a good disposition. It is a suitable animal for living in an urban environment. It does not require much exercise, but it may suffer from arthritis. Some good daily physical exercise will be enough.

It is an energetic dog that loves its owners completely and will protect them in any situation. He is an excellent guardian who loves to bark. They do not trust strangers.

And, they are obedient during training. They are even used for agility and other competitions. They tend to get bored easily, and on those occasions they can act pig-headed.

Giant schnauzers can have aggressive attitudes, especially with other dogs of the same sex. They are very affectionate with children. However, we must remember that they are very strong and large dogs that can knock over and injure a small child without meaning to.

Giant schnauzers require constant attention, care and affection. They need to be surrounded by their human family all the time. Otherwise, their mood will become a little sullen and gloomy, and they may even lose respect for their owners.

In the case of living with smaller dogs or other animals, you have to be especially careful because they have a very developed hunting instinct. To become accustomed to animals from other species, they have to live with them from a young age, so that way, they will get used to it.

As guardians of different places, of their owner’s house, patios, farms, etc., Schnauzer dogs are a very valuable tool. They have an essentially protective nature, and they bark insistently at the arrival of any danger.

They have a territorial and protective attitude over their spaces, and what they consider to be theirs and their family’s. For this reason, it is advisable that they live with other dogs from a very young age, so that they become accustomed to sharing the spaces that surround them.

It is important to take into account their fur, which should be brushed and cleaned very frequently, so that no knots will form. They have two layers of hair: one top layer that serves as protection, and another much softer, inner layer.

Also its stomach is its weak point. You have to control their diet, since they have a propensity to eat more than they need, and it is essential for them to keep a very balanced diet in order to avoid weight gain. It is advisable to give this dog natural food.

Do not be confuse by its small size. Although, it seems that they have a weak character and personality, it is not the case. They are creatures that are known for their strong and steady barking, and even their characteristic howls. In this way, they show signs of their intelligence and their determined and energetic temperament.

The miniature schnauzer is considered to be included in the category of terriers, that is to say, in the group of dogs that were bred to work in the soil, as well as to hunt small rodents, like rats and mice.

These little dogs are the almost perfect companion animal. A classically quiet dog, it is easy to train to be obedient, and it is not a biter. It gets along well with children and other dogs. It likes to become part of its family’s routine.

The miniature Schnauzer is a very friendly, intelligent, happy, energetic and playful animal. It gets along well with the children and enjoys being with its family.

With good training on the owner’s part, it can get along with and live with other dogs. Good socialization is important to make it a good companion for all members of the household.

Their barking is frequent, but it does not have a strong intensity. Rather, it is a prolonged, soft howl.