The Elf Cat: Curved Ears and No Hair

This is a recently created type of cat, and it isn't officially recognized as a breed yet. Because these cats are hairless, they need special care because they're more likely to have skin problems. 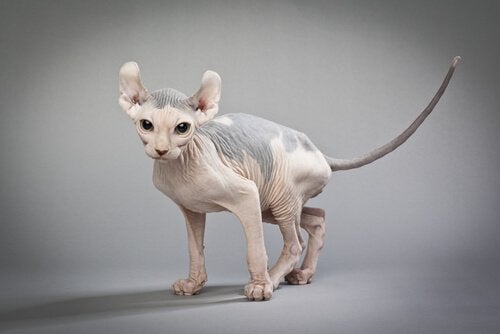 Human beings keep on trying to play God by creating new pets. One of mankind’s newest “accidents” is the outcome of crossbreeding an American Curl and a Sphynx. That’s how the Elf Cat came into to existence. It’s a hairless feline with curved ears, which is where its name comes from.

Even those cat was initially created in the early 2000s, the main cat associations still haven’t recognized the Elf Cat as a breed. Right now they still call it a variation of the Sphynx.

It was created by Karen Nelson and Kristen Leedom. Their idea was to make a cat that was hairless like a Sphynx but with curved ears like an American Curl.

The outcome was a cat that seems like it come out of a Celtic, Nordic, or Germanic myth. Some people even say it looks kind of like a dog.

The Elf Cat is  the newest edition to hairless cats. Recently created in the US, this cat has curved ears like a mythological creature.

The physical features of the Elf Cat

This minion’s ears are long, pointy, and slightly curved backward. Elf cats can either be hairless or have hair that’s almost impossible with the naked eye or even through touch. Here are some other traits:

They usually weigh between 10-15 pounds. Also, all colors and patterns are acceptable with this breed.

Moving past the physical side of things, here are some other words to describe them:

They’re very active, frisky, playful and loves to climb on things. It’s always good to give them toys and places to climb on before they destroy your home.

They’re very adaptable and get along well with other pets, but elf cats hate being alone. It can also be a good idea to have another cat so they can spend time with each other while you are out of the house.

Special care for an elf cat

Like all hairless cats, they need large amounts of care and hygiene. You need to bathe it on a regular basis to get rid of the oily substance that builds-up on its skin. It’s very important to get it used to this at a young age. You can also use wet wipes to avoid having to go through all the trouble of taking a bath.

Regardless, you should talk to your vet to find out what products won’t harm its skin. Remember that if you don’t keep an Elf Cat clean or maintain its hygiene, it will turn sticky and dirty, and also develop skin problems.

They’re generally healthy pets without major genetic issues, but don’t let them be in the cold or sun for too long. Being hairless means they can’t keep up with cold temperatures, and their skin is vulnerable to burns and irritation.

You should also make sure your cat’s areas in the house are clean. It’s the best way to keep it from getting a skin infection from a bacteria lying around.