The Whippet: Characteristics and Behavior

This dog can use its power win a race against the traditional greyhound; even though it used to be a hunting breed 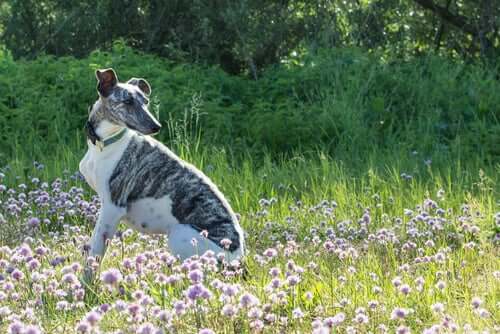 The whippet is a breed of its own, yet it’s often confused with greyhounds. The physical differences are subtle, but the two breeds have very different jobs. Learn the differences here.

History of the whippet

Greyhounds were extremely sought after in the working-class districts of London in the 18th century. They were so popular that dog racing fans couldn’t afford them. Therefore, dog breeders developed a breed similar to the English greyhound, but one that was much more affordable.

The creators of this breed wanted a dog that was as fast and agile as a greyhound, but more tenacious and courageous. They did this by crossbreeding the English greyhound with several terriers (such as the Yorkshire terrier or English terrier. This resulted in a smaller dog built for speed and endurance.

At first, the whippet was a hunting dog, which used to hunt small animals such as rabbits, but it soon became a racing dog. It’s faster than a greyhound, but has less stamina, therefore had great potential to win.

Males are slightly larger than females as they reach 18.5 to 20 inches in height and weigh about 22 to 26 pounds. Females are just a few inches shorter, between 17 and 18.5, although their average weight is the same as males.

It’s a tall, light and medium-sized dog. Therefore, it’s a stylized, elegant and agile breed. It has long, thin legs, and a deep chest. The difference between its deep chest and narrow body is very evident. Generally speaking, it looks like a greyhound.

Like most greyhound breeds, it has a long, thin head and a muscular neck, as well a long, thin nose. Whippets also have small, dark eyes and small, triangular ears that fall to the side of the head.

When they were first bred, they inherited the long fur of certain terriers, but this was lost over time. All whippets now have short, fine hair and can be any color.

The whippet is shy and reserved, but not as much as greyhounds. They’re neither enthusiastic nor energetic, and it’s not uncommon to see that they’re less fearful than their English or Spanish relatives.

Their terrier genes have led them to be brave and a little impulsive at times. They’re also extremely loyal and affectionate with their owners. They don’t respond well to punishment or force, therefore they need to be trained with positive reinforcement.

They’re docile and easy to handle, even when dealing with children, as long as they’re treated with respect and care. They’re known to get into fights with other dogs whilst working or playing. This is common at dog racing tracks.

Whippets, like most greyhounds, are a fairly healthy breed. They have no specific illnesses, although they can fall ill and have other health problems common to dogs.

It’s important to visit the vet for regular checkups, including booster jabs and flea treatments. Likewise, the vet should consider if preventative treatment is necessary to avoid hip or elbow dysplasia, common in dogs of this size.

Because of their thinness, whippets feel the cold more than other breeds. They need to be kept warm during the coldest seasons, and they need to sleep indoors and not outside in kennels.

Whippets aren’t known for being energetic animals, but they do need regular exercise and a controlled diet, as they’re prone to becoming overweight.

So, in summary, whippets are similar to greyhounds, but have their own recognizable character and much more variety of colors. However, they’re smaller than Spanish greyhounds, and could get into trouble in a race.