Anti-Inflammatories Can Be Fatal for Dogs and Cats

The side effects of these prescription drugs can cause organ damage or even death for dogs and cats. It usually take place within 18-36 hours after taking the medication. 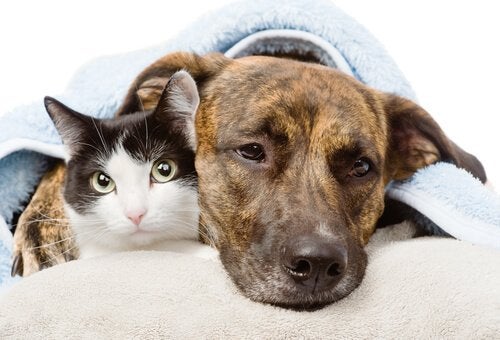 Anti-inflammatories are medications vets prescribe cats and dogs to reduce pain and swelling. They usually used for bone and joint related diseases such as arthrosis and arthritis, but there are a lot of other similar issues adult animals can have.

When should you give dogs and cats anti-inflammatories? After considering all of the risks, people and animals should only ever take medications when they’re prescribed.

Classifications, and some risks to keep in mind

There are two kinds of anti-inflammatories: non-steroids like aspirin, and steroids like paracetamol. Steroids are problematic for animals because they contain corticoids. However, they’re also the most powerful and researched drug.

Due to how dangerous anti-inflammatories can be for dogs and cats, you should only give them to your pet if your vet has prescribed it. Medicating your pet without a doctor’s approval could cause irreversible damage.

For example, aspirin can be fatal for cats–even if it’s only one pill. It’s stronger in dogs than in humans because it takes longer for dogs to filter aspirin out of the body.

Remember that a prescription should always be prescribed by your pet. Make sure you also give your pet’s medical history to the vet that’s prescribing the medication. On top of that, you can have them do blood and urine tests before and during treatment. That way you’ll be able to deal with any negative side effects.

Side effects of anti-inflammatories for dogs and cats

Anti-inflammatories can cause side effects for dogs and cats. There are times when these medications are so toxic they can cause death.

Death is almost instant for some dog breeds like Border Collies and other Shepherds. Their body can’t process the steroid.

Different effects on dogs and cats

Dogs and cats share some side effects that are caused by anti-inflammatories, but there are also some differences. Knowing these can help you spot warning signs early on.

The most common side effects for dogs are: lack of energy, blood in urine or stools, vomiting, abdominal pain, loss of appetite, increased heart rate, intestinal ulcers, and even death.

Some of the symptoms cats might have are: anorexia, hypothermia, depression, weakness, dark-colored mucus, salivation, and vomiting. Pay attention to your cat to see if he has any swelling on his face and paws.

You need to pay extra attention if these symptoms appear. They often can have your cat enter a coma and then death within 18-36 hours after your pet took the medication.

When the medication becomes toxic, it isn’t always fatal but it can cause organ damage. Some pets end up developing liver and kidney problems, which you can tell if their skin, gums, or eyes turn yellow. They might also show signs of dehydration, and an unusual amount of thirstiness and urination.

Precautions, prevention, and how to treat it

Unless your vet has prescribed you cat, anti-inflammatories shouldn’t combined with any other corticoids. It’s also good to give your cat the medication only after they’ve eaten, so his body can absorb the drug more easily. While your cat is on these medications, you have to give your pet fresh water all day so they don’t get dehydrated.

When your pet is finalizing the treatment, you can’t suddenly stop giving him the medication. If you don’t wean him off of it gradually, he might have a sudden drop in cortisol. If this takes place, it can cause upper kidney failure with symptoms such as weakness, fatigue, vomiting, loss of appetite, and trouble breathing.

Likewise, always observe your pet during the first few hours after you give him an anti-inflammatory. A change in behavior is a sign that something is wrong. If that happens, suspend the treatment and go straight to the vet.

Link copied!
Interesting Articles
Illnesses and Treatment
What Are the Causes of Ataxia in Dogs?