Canine Hematuria: Blood in the Urine

Is blood in the urine always a sign of an underlying illness? Let's find out! 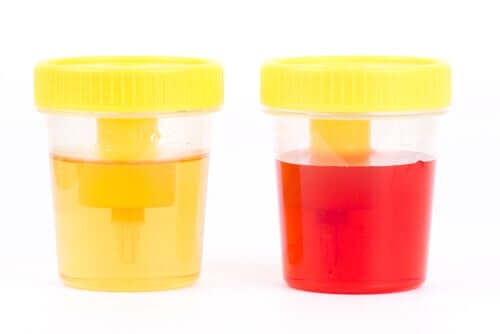 The presence of blood in the urine, whether in dogs or other animals, is known as hematuria. The blood isn’t always visible to the naked eye and, in some cases, it can only be detected through urine analysis. This is known as microscopic hematuria. If the urine is visibly red in color, then it is classified as macroscopic.

Blood in the urine can occur for a number of different reasons, but it nearly always has a pathological cause. This means that the presence of blood in the urine is never normal, so it’s important to identify the underlying cause. If you notice blood in your dog’s urine, you must book an appointment with your vet as soon as possible.

Common causes of blood in the urine

In the majority of cases, the presence of blood in the urine is usually a sign of a problem in the urogenital tract. However, it could also be the result of a blood disorder or a symptom of another type of underlying illness. The most common causes of hematuria, both microscopic and macroscopic, include:

The build-up of bacteria in any section of the urinary tract can cause inflammation and congestion, leading to the appearance of blood in the urine. Alternatively, certain parasites, including ehrlichiosis and leptospirosis, can also cause hematuria.

Kidney stones appear when there are high levels of substances such as calcium, oxalate, or uric acid in the body that the kidneys are unable to get rid of. These substances gradually build up, forming crystals. The crystals can lodge themselves in any part of the urinary tract, from the kidneys to the bladder. They damage the internal lining, causing bleeding.

Neoplasms, whether malignant or benign, are abnormal and excessive growths of tissue in specific parts of the body. For example, prostatic hyperplasia, hemangioma, or hemangiosarcoma often cause bleeding.

Inflammation of organs in the urogenital system

Inflammatory processes, whatever their nature, cause a localized increase in temperature and blood flow. In some cases, this can lead to ruptures in the blood vessels, causing bleeding. A non-pathological example of this is the vulva swelling that female dogs can suffer during the proestrus stage of their heat cycle.

Damage to the uterine wall is a common problem in older, unneutered female dogs. This makes it easier for bacteria to build-up, which can eventually lead to a serious infection that, if not corrected surgically, can be fatal. Pyometra can cause bleeding in the reproductive system, leading to blood in the urine.

Accidental ingestion of certain poisons can cause changes in the permeability of the kidneys. This can cause them to secrete red blood cells. If left untreated, it can eventually lead to fatal renal failure.

Blood in the urine – additional symptoms

Blood in the urine isn’t a symptom that appears on its own. As we mentioned before, it’s almost always the result of an underlying illness or health issue. So, if you notice red blood cells in your dog’s urine, it’s important to keep an eye out for other symptoms.

Normally, when hematuria is caused by a blood disorder, it will also be accompanied by other types of hemorrhages, such as epistaxis (a nose bleed) or bleeding gums.

Depending on the nature of the issue, problems in the urogenital system can also cause symptoms such as:

How to prevent blood in your dog’s urine

If your dog contracts an illness, develops some kind of neoplasm, or appears to be suffering age-related issues, it’s important to take steps to combat these problems. However, certain infections and diseases can be prevented with a nutritious diet and proper hydration, as well as avoiding health problems such as obesity. 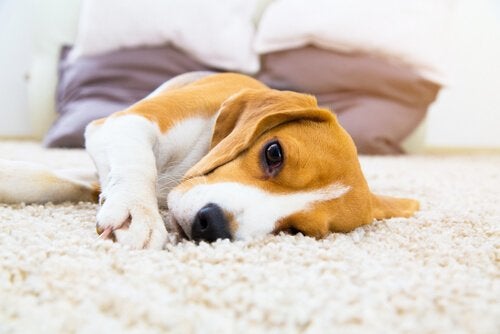 Urinary Infections in Dogs: causes and treatments
Urinary infections in dogs are more common than you might think. We'll tell you about the causes, treatments, and how to tell if your dog has an infection. Read more »
Interesting Articles