What You Need to Know About Pyometra in Bitches

Pyometra in bitches is serious but preventable infection. Read today's article to discover more about symptoms, treatment, and prevention. 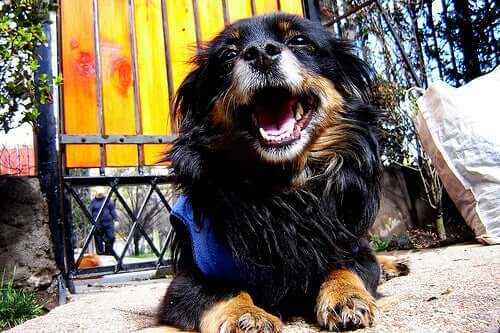 Pyometra is the accumulation and secretion of pus in the uterus and it affects bitches that have reached sexual maturity. In general, it occurs when dogs are at least 5 years old. Today, we’ll talk about what pyometra in bitches, including symptoms and treatment.

What exactly is pyometra?

Pyometra is an infectious illness that involves the accumulation of pus inside the canine uterus. It affects those animals that have already had their first heat. Females who have undergone hormone treatments may be more prone to suffering from pyometra.

What produces pyometra in bitches?

To understand why this infection occurs, we need to take a close look at a dog’s menstrual cycle. A bitch’s first cycle usually appears between the 6th and 12th month of life and usually lasts approximately 6 months.

The canine menstrual cycle consists of the following stages:

How does pyometra occur?

This pathology occurs as the result of a metabolic alteration of progesterone that causes a bacterial infection. The bacteria act at times when hormone levels in the blood are higher, meaning that defenses in the uterus are lower. This is why the infection occurs during the diestrus phase.

This hormonal activity can causes cysts in the endometrium. All of this, together with the entering of bacteria, creates the perfect storm for illness and infection.

On occasion, a dog’s body responds inadequately to progesterone, producing an increase in the thickness of the uterine walls. In the absence of a pregnancy, this can lead to cystic formations that facilitate the growth of bacteria.

The use of contraceptives contributes to the appearance of pyometra. This is especially because of the presence of progestagens and estrogens.

How to detect the symptoms of pyometra in bitches

Symptoms are not specific, but can include the following:

It’s important to know that this is an extremely urgent illness. Therefore, it’s vital that you seek immediate veterinary attention in the presence of any of the above symptoms.

The diagnosis of pyometra in bitches

In general, diagnosis involves a medical examination as well as taking a look at an animal’s medical history.

If this isn’t sufficient, then X-rays will be necessary. A veterinarian may also decide to perform blood tests in order to determine the seriousness of the disease and prognosis.

Keeping in mind that this illness is urgent, you should treat it as such. In most cases, treatment involves surgery. It consists of the removal of the uterus and the ovaries as well as the administration of antibiotics.
If the animal can still reproduce, then the draining and cleaning of the uterus may be a viable alternative. Just the same, antibiotics will be necessary. However, this option involves the risk of the infection coming back and being even worse. That’s why the pharmacological route is not always recommendable.

The best ways to prevent pyometra in bitches

To avoid the risk of pyometra, experts recommend sterilizing females dogs who will not be reproducing. What’s more, they warn against the use of contraceptives.

One option that’s useful is controlling your dog’s menstrual cycle. This way, you can be sure that bleeding occurs at the correct time.

What’s more, your dog can have periodic ultrasounds to make sure that everything is as it should be. The idea here is to keep the infection from appearing.

Most of all, it’s important for dog owners to watch out for the appearance of the above symptoms. And, if symptoms appear, owners should seek urgent medical care in order to minimize the risk of serious infection.

Bitches in Season: Heat, Pregnancy and Birth
You've just adopted a female dog and you're full of questions. You've heard about bitches in season but you don't really know all of the details. Read more »
Link copied!
Interesting Articles
Illnesses and Treatment
Characteristics of Displaced Abomasum in Cows