The Dangers of Dyeing an Animal's Fur

Dyeing an animal's fur can even lead to their death, due to the fact that the products are designed for humans and are toxic to animals; it also causes allergies, suffering, behavioral changes and socialization problems with others of their kind. 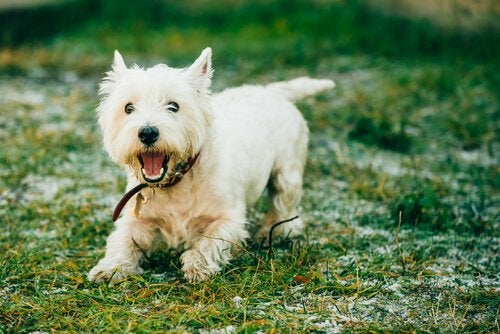 Maybe you’ve seen oddly-colored rabbits or parakeets for sale in parks or stores. Or perhaps you’ve seen videos and pictures on the internet of dogs and cats with colorful hair. While it may seem funny, the truth is that dyeing an animal’s fur exposes them to serious health risks. Keep on reading to find out why…

First it was a fad that originated in Tokyo and later expanded to Beijing. Of course, it didn’t take long for the trend to migrate to other parts of the world, like Paris, London and New York. Dogs with dyed fur would go out on the street for walks with their owners, who enjoyed the attention.

It doesn’t matter what the reasons are that lead a person to dye their pet’s fur or to buy an animal whose fur has been dyed; what people should be worried about are the negative consequences that these actions have on the animals in question.

1. It can be poisonous

The dyes that are used for altering the color of an animal’s fur are appropriate for use on human beings, but they must not be used on animals. They contain certain harmful substances that can cause irreversible health issues.

For one, when the products come in contact with the animal’s skin, it permeates the dermis and travels to the inside of the animal’s body. In addition, they clog the animal’s pores and don’t allow toxins out. As if all this were not enough, the toxins then cause irritation, itching, burns, eczema and other skin problems.

Likewise, there is another factor that must be taken into account: when it comes to dogs and cats, they will inevitably lick themselves because the dye will be itchy, and the toxins can shut down the animal’s digestive system! This can cause vomiting, diarrhea and even death.

2. It can cause allergic reactions

Although in recent times there have been a few dyes developed specifically for pets, the truth is that even then they may not be safe. Many animals are allergic to the ingredients in them. In fact, the reaction can be just as bad as with dyes meant for humans.

Always remember that dogs and cats have very delicate skin. Therefore, you shouldn’t even bathe your pets with the same shampoo you use.

3. Dyeing an animal’s fur is stressful

If you are thinking about dyeing an animal’s fur, there’s something else you should know. The dyeing process is much more stressful for an animal than getting a bath. It can be quite upsetting for them.

Getting the animal’s fur wet, applying the dye, letting the dye take effect, and rinsing and drying it may very well take an hour. The entire time, your dog may be scared and even bite you.

4. It changes their behavior

Dyeing an animal’s fur is completely unnatural. They already have a certain color to their fur and there’s no reason to change it. If you do, it can alter their behavior. Many dogs won’t want to go for a walk or get out of bed. Something similar thing happens when they get their fur trimmed in the summer.

If a dog isn’t in contact with others of his species, he could get stressed and anxious. He could also develop behavioral problems. Don’t forget that socialization starting at an early age is very important.

Even if we put aside for a moment how toxic dyes can be, you must bear in mind that the dye’s particular aroma will camouflage your pet’s natural smell, meaning they won’t be able to communicate properly!

Therefore, even if people smile when they see a green dog, other animals will reject them and not approach them. It’s not fair for an animal to have to endure this. They shouldn’t have to suffer for a decision their owner made on a whim.

This is yet another trend that unfortunately is very toxic for your pet. Even if you love them a lot, your pet is not a person, much less your baby. ‘Humanizing’ dogs and cats is harmful to them. They won’t obey the rules or relate to other animals well, to name just a few things.

The world of fashion never ceases to surprise us. New clothes, new colors, and new accessories are appearing almost every…

Beauty and Fashion
Caring for Your Dog's Coat in Summer

Caring for your dog's coat in summer is essential, allowing you to safely enjoy the warm weather together. Generally speaking,…

These days, people are always looking for new ways to pamper their pets. As a result, pet spas have seen…

Beauty and Fashion
Do Pets Need to Wear Clothes?

There are few things as funny as a dressed-up animal. Currently, trendy pets wear more than just clothes. They also wear expensive accessories such as rhinestone collars and snow boots.…

Beauty and Fashion
The Delightful Eccentricities of Japanese Pet Owners

We often talk about the eccentricities of devoted pet owners, like the Maharaja and his beloved dogs or the pets…

Beauty and Fashion
Panda Chow Chow: Is it a Dog or a Panda?

Call it Mother Nature, the Creator, evolution or whatever else you may believe in, but it always surprises us with…