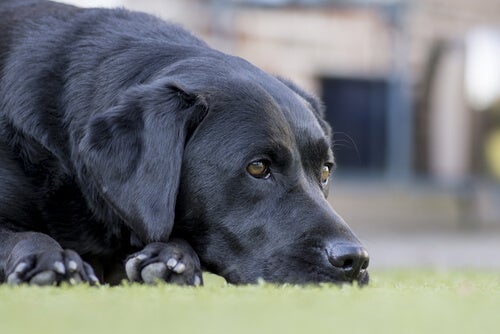 A dog over 8 years old is already considered to be an old dog. In large breeds, it may even be earlier. From that moment on, the animal will begin to suffer imbalances in its health, including Alzheimer’s. This will not change, even if the dog has always led a good lifestyle. That is why we know today the diseases common in old dogs.

Diseases of old dogs can be very sensitive

When a disease arrives, it is normal for the animal’s personality to seem modified. There will be less resistance and willpower. The animal may begin to suffer from hearing or vision problems. It will also be normal for him to be somewhat listless and not want to leave the house.

It is very important to know what diseases are common in old dogs. In this way, you will be able to adequately prepare yourself.

The main diseases common in old dogs and their treatments

It is the best known among the diseases in elderly dogs. It also manifests itself in people and in other animals. The symptoms of arthritis will be the same in canines as in people: articular and bone pain, discomfort when performing movements, among other things.

If detected early, arthritis is treatable. Although it is a progressive disease, there are several ways to stop its impact on the body. Your veterinarian will be in charge of giving the correct treatment to fight arthritis. It is important to go to a professional when faced with the animal’s first symptoms.

Most older dogs suffer from kidney problems. This is a chronic disease. It usually begins to manifest itself through renal failure. There are clear symptoms that warn about this type of disease. The loss of appetite and nausea are two of the main ones.

As in the case of arthritis, these pathologies have no cure. Even so, it is controllable even in very old dogs. The veterinarian will provide appropriate medication to reduce the discomfort caused by kidney disease.

This is also one of the most common diseases in elderly dogs. Deafness is a very uncomfortable condition for our pets. For this reason, it will be necessary to develop the visual attention of the animal very well. In cases of deafness, it is common for him to start using his eyes more to communicate.

Along with deafness, blindness is another common condition in elderly dogs. We can differentiate between two types of blindness. One is the degenerative, which has no cure. The other is related to cataracts. For the latter, it will be possible to consider a surgical intervention.

It should be remembered that the sense of sight, although very important, is not the primary one in a dog. A blind dog will perfectly maintain its same habits of life. The important thing will always be preserving his sense of smell. This is the essential sense for dogs.

Like people, dogs also suffer from cognitive dysfunction. This is very normal during old age. Among the symptoms of this disease are insomnia, disorientation, confusion, among others. In these cases, it is necessary to go to the veterinarian. This professional may prescribe appropriate medications to control the disease.

This fearsome disease is not exclusive to humans. Dogs also suffer from cancer. It originates in them due to two big factors. One is diet, and the other is high pollution of the environment. Do not forget that it is a silent disease. For its detection, frequent visits to the veterinarian are essential.

As in the case of humans, cancer diagnosed early can be combated. It is a very sensitive disease.

Dogs can also have a high degree of obesity. This aspect can manifest itself at any age, but it will be during old age when it causes greater damage. Treats and snacks are also key factors for animals. Old and obese dogs will begin to experience joint pain. These symptoms may be indicators of heart and kidney diseases.

An animal’s having the correct diet is essential for its good health. Many of the diseases common in old dogs originate due to bad eating habits.

Knowing all these diseases in elderly dogs ​​makes it much easier to detect them. An animal’s body works almost the same as that of a very old person. And as with people, care of and attention to these pets should be maximized.