Did You Know that Dogs Hate Hugs? 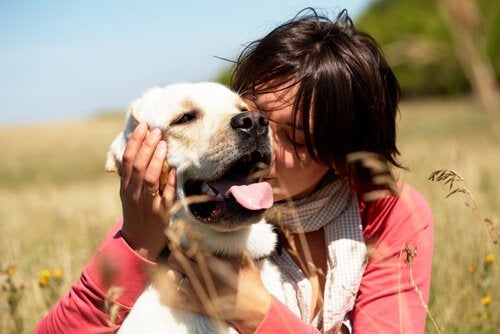 It’s inevitable to resist hugging our pets, because of their plush appearance (especially smalls ones). They’re so irresistible and we just have to fill them hugs! Unfortunately, dogs hate hugs, or at least a new study show that. Do you want to find out why?

The study conducted by Psychology Today, aimed to show what feelings dogs had while being hugged. How did they do it? They simply took pictures of around 250 dogs when they being hugged by their owners. These photos revealed the animals body language, which clearly showed their feelings.

When a dog lets its ears point backwards, this is a sign of discomfort, nervousness and fear. It doesn’t like something and this is its way of showing it.

If a dogs ears are pointed backwards with its mouth open and tongue out, there is no doubt that your dog is stressed. You´d better let go of your dog and leave it alone if it is doing that.

If your dog shakes while hugging being hugged, it is because it feels frightened and uncomfortable. Your dog wants you to stop doing whatever you’re doing because it doesn´t understand what´s going on.

Rolling up in a ball

If you call your dog and it rolls up in a ball in some corner of the house, then looks at you from the corner of its eye, forget it. He’s saying “I need my space.” A hug is definitely not a good idea at all.

Whether you have it in your arms or not, if your dog squirms, it wants you to stop. Leave it on the floor and let it be.

Facts from the study

Now that you know the meaning of body language, let’s see why this study revealed that dogs hate hugs. The photos obviously showed all the gestures animals made while their owners hugged them.

The study demonstrated that dogs hate hugs because 81.6% of the canines – – used as a sample – – showed some of the aforementioned signs of anxiety, fear and nervousness while being hugged.

Only 7.6% seemed to show discomfort with hugs (perhaps the breed, time spent with its master or the special bond formed between them may influence this outcome).

Approximately 10% remained neutral while being hugged.

Well, Stanley Coren shows that dogs are cursorial animals. This means that their bodies, brains, instincts, and impulses are designed to run and to be in motion. A hug makes a dog stay immobilized, which makes it feel trapped and unable to do what it really wants: to move and run.