Microorganisms that Cause Chronic Fatigue in Animals

Chronic fatigue syndrome is a disease that occurs in both people and animals. Below we’ll discuss the role of microorganisms in this disease further. 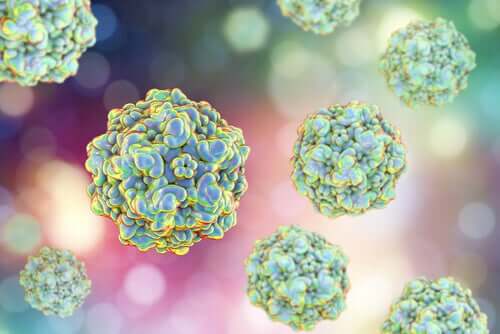 There are several microorganisms capable of affecting living beings. Because of this, sometimes both humans and animals can become ill. In this sense, it’s interesting to know which microorganisms cause chronic fatigue.

To better understand this, we must first clarify two fundamental issues:

Below, we’ll show you some examples of animals suffering from this illness and the scientific evidence known to date, which will then help us understand the importance of these tiny beings, that play a crucial role in animal health.

Chronic Fatigue Syndrome (CFS), also known as ‘myalgic encephalomyelitis’ (ME), is a disease that starts with something similar to the flu.

It’s a disease with symptoms of intense fatigue, both physical and mental, and is prolonged over time (at least 6 months). It can also lead to concentration, memory, and muscle pain problems. Some professionals even link it to mental health.

Only recently did we believe that this disease was unique in humans, however, several studies have revealed cases of CFS in animals, such as horses and pets, indicating a possible case of zoonosis.

Its cause, diagnosis, and treatment aren’t very clear nowadays, but all revolve around a viral or bacterial infection in the central nervous system (CNS), consequently causing an immune system disorder.

Research has also revealed the presence of a variety of diseases capable of causing life-long infections, by evading the immune system:

Microorganisms that cause chronic fatigue

Bacteria, parasites, and viruses are microorganisms that can cause fatigue, or are involved in chronic fatigue syndrome.

A study in England suggested that horses could also suffer from CFS. In fact, they confirmed that there is a link between humans and pets.

Four horses were used to carry out an experiment, two of them had chronic fatigue and weakness that made it difficult for them to make any effort. They appeared depressed, with their head down and drooping lips, as well as sleepy and apathetic. On the other hand, the other two horses had symptoms of weakness, asthenia, and reduced weight.

Blood smear and blood culture tests found that all of them were carrying micrococcus-like bacteria that healthy horses didn’t have.

The author of the same study previously tested cats and dogs carrying micrococci in the blood, and tested positive for staphylococcus intermedius and staphylococcus xilosus. Therefore, bacteria may be microorganisms that cause chronic fatigue.

In another essay, published in the Progress in Neurobiology journal, scientists used mice as a fatigue study model. As a result, they found that both Cryptosporidium parvum and Toxoplasma gondii infections affected the activity of mice for several weeks.

The parasite Trypanosoma brucei (causing sleep disease) caused daytime sleepiness and insomnia in infected rats. Once in the blood, it can invade other tissues, such as the nervous system.

In all cases, it was shown that these unicellular parasites can also cause chronic fatigue.

Other microorganisms that cause chronic fatigue are viruses. Numerous studies have confirmed that CFS is due to a set of brain syndromes attributed to viral encephalopathies. In fact, it has been found that the following viruses could be associated with this disease:

Some of them are found in the cerebrospinal fluid itself and experts suggest that this is where it causes the infection. However, others are found in other parts of the body and indirectly become infected with the CNS.

Another article points out that viruses are more likely to cause this disease than bacteria, based on the following ideas:

The viruses from the Picornaviridae family, which includes enterovirus, are present in the healthy population. However, many enteroviruses have caused CFS and several subtypes are known to occasionally affect the brain. The herpes family and parvovirus also have a similar profile.

There are several microorganisms that can cause chronic fatigue and are still being studied.

To conclude, the study of bacteria, parasites, and viruses allows us to understand infectious diseases and also develop effective treatments against them.

Microbiology, however, goes far beyond that. This scientific field tries to help us understand the importance of these ‘invisible’ organisms, since life wouldn’t exist without them. Its role in nature is important to numerous biological and vital processes.

How to Detect Canine Parvovirus
If you have a dog, you might have heard of canine parvovirus. This is a contagious disease with a high mortality rate. The key is early detection. Read more »
Link copied!
Interesting Articles
Care and Well-being
The Science Behind the Well-Being of Domestic Cats

The well-being of domestic cats is often taken for granted unless they have symptoms of serious illness. This is because…

Trips to the dog groomer aren't always pleasant for a pet and that's a well-known fact. This is because no…