Natural Remedies to Prevent and Remove Tartar Buildup in Dogs 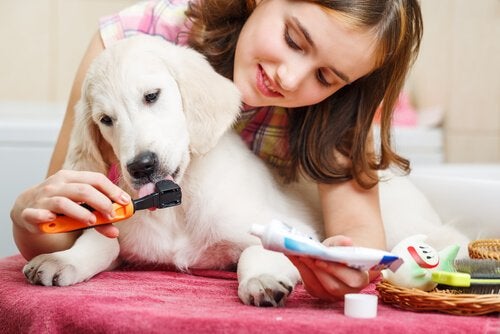 Like in humans, that dreaded tartar forms naturally on dogs’ teeth too, and for the same reasons. Tartar is plaque that sticks to the base of the tooth, product of accumulated food residue plus bacteria and mineral salts. Once hardened, it can be a real problem.

At first the tartar is somewhat soft and thin and easily removable. But in the long term, it solidifies in such a way that more drastic measures are necessary to eradicate it—measures that will mean a trip to the vet’s office.

Today we’re going to learn a bit more about tartar, or plaque. There are several natural remedies that can prevent and treat tartar buildup in dogs and we’ll tell you about them.

Symptoms of Tartar Buildup in Dogs

You dog’s mouth and teeth should be carefully examined for visible evidence of plaque. Look to see if any dark stains and hard, yellowish layers have formed at the base of their teeth, close to the gums.

It’s also a good idea to check the between the teeth, because tartar also tends to build up there. Before the tartar actually appears, your dog may also have symptoms like bad breath and some pain while chewing their food.

You may also notice gum inflammation (gingivitis), lesions in the oral cavity, excessive salivation and signs of infection in the mouth.

Over time, any prolonged presence of tartar will have very serious consequences. For example, teeth may fall out and abscesses could spread to other areas of the animal’s head. Finally, the most serious complications are heart, liver, kidney and bowel diseases.

But there’s no reason it should get to that extreme. After all, it’s possible to prevent and treat it early. When tartar is forming there is action you as the dog’s owner can take to stop its progression and eliminate it. Afterwards, check-ups and periodic care will keep it from reappearing.

If time has gone by and the tartar has hardened, going to the vet for periodic check-ups is the best option. They will mechanically remove any remnants of tartar.

How to Remove and Prevent the Formation of Tartar in Dogs

Be aware that certain breeds of dogs are more likely to get tartar buildup. A couple of good examples:

Keep reading to learn about natural remedies that can help.

Vets are best at it, but they can also give you guidelines so you can do it yourself. Dogs don’t need their teeth to be brushed as frequently as humans do. You also use different tools. A special brush and toothpaste will be needed, since those intended for humans are toxic to dogs.

If the dog isn’t used to it, help them overcome their fear first. Making it a habit will help them accept it calmly. Rinse their mouth very well and then finish with chlorhexidine spray or gel.

A dog’s nutrition and feeding schedule shouldn’t be the same as for humans, nor should a dog be eating leftovers. In nature, dogs would eat food with a variety of textures available, some of which would have a self-cleaning action. Mix up the food you feed your dog.

There are treats and pet toys on the market specially designed to reduce tartar buildup. Your pet will be having fun and cleaning their teeth at the same time.

You can brush your dog’s teeth with baking soda. Just dilute a teaspoon of it in a glass of water. Vinegar is also good for brushing, in its original concentration, followed by a good rinse.

By eating vegetables and crunchy rinds, your canine friend will be scraping the surfaces of their teeth at the same time, which amounts to natural cleansing.

Oral Hygiene
Feline Teeth - What You Should Know about Them

Many people consider halitosis in dogs to be a natural thing. They think it's completely normal for a dog to smell bad. But this is far from the truth. Sure,…

Gum disease in dogs, also known as periodontal disease, causes the weakening and eventual loss of the structures that support…