What Should You Know About Cat Pregnancy?

Some of the most important things to know about cat pregnancy are the symptoms and gestures that they show. Cats are pregnant for just over two months. 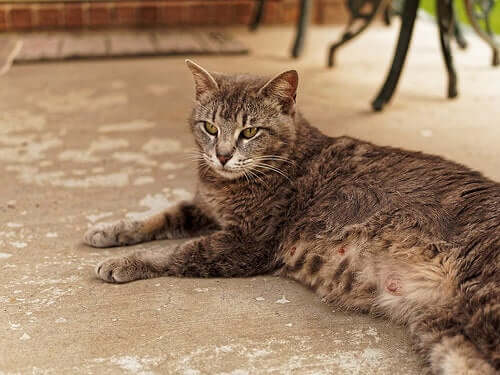 If you think that your kitten is pregnant, or you know she is and you want to look after her, then we recommend that you read this article. We’ll tell you everything you need to know about cat pregnancy.

When we think of cat pregnancy, we imagine cats with big bellies. However, you only see this after four weeks. Luckily, there are physical and behavioral signs of pregnancy that you can notice earlier than that.

Cats’ nipples swell from the first moments of pregnancy. Sometimes this also happens during heat, so it’s not always a reliable sign.

Something that happens specifically in pregnancy is that their nipples turn a more intense pink color. In fact, you can see this without looking too closely or even moving their fur.

If, for example, you have a kitten who loves to eat and all of a sudden she leaves her food on her plate, or she isn’t happy to see her food, then she might be pregnant.

Of course, you should take the cat to the vet to make sure that she isn’t ill. But, what you really want to know is if she’s expecting, and the specialist can confirm that too.

It’s true that cats like to sleep during the day and hunt or play at night, but they can also be active during the day. However, if your cat is pregnant, she will spend more hours sleeping or lying on the couch or bed.

In addition, another behavioral change is that they don’t play as much as usual. They jump and run less, and not as many objects catch their attention as before.

This means that if your pet was cuddly, she might be rougher, or vice versa. When they have a lot of confidence in their owners, pregnant cats get closer to them and want pets and attention at all times.

However, you have to know that, during cat pregnancy, she might get more scared, more suspicious or more nervous. Usually, this is more common in cats that live on the street or have been recently rescued. Also, you’ll want to keep your cat away from other pets in the house, even the ones that get along well.

Reproduction in cats is similar to that of all mammals. The male sperm reaches the female’s egg during copulation, and implants in the uterus within five days.

Cat pregnancy lasts between 64 and 67 days, or just over two months. The number of kittens per litter will depend on several factors, but they usually have between 1 and 5.

Between the first and third week, you don’t notice cat pregnancy too much, as we mentioned earlier. Around day 20, you can hear the kittens’ heartbeats on an ultrasound.

The embryos are 2 inches long and 0.2 ounces in weight around day 33 of pregnancy, but they only need 10 more days to double in size. That’s why, after around one month, you’ll notice a swollen belly.

Between the fourth and fifth week, the mother will start to feel nauseous. Don’t worry, it’s normal. In fact, it’s due to hormonal changes in her body, just like pregnant women.

As the kittens gain weight, the mother also gets a little fat, and she may want to eat more than normal. It’s very important to talk to the vet about the quantity and quality of food that you give her during this period. Not only is she feeding herself, but also her young.

At around 45 days, the kittens will develop their muzzle, and also the fur that will cover them throughout their lives. A few days later, it’s possible to feel the kittens move.

Labor happens around day 65. Babies usually weigh between 3 and 3.5 ounces, and are at least 4 inches long. You’ll realize the birth is about to happen a week before. The cat will look for a secluded, silent and calm place.

Finally, it’s a good idea to prepare a cardboard box with towels and blankets so that she feels comfortable and can give birth without any problems. On the day of delivery, her intense meowing and nervousness will let you know that she’s about to deliver. Let her have her babies alone, but don’t neglect her if there’s any problem.

How to Care for Pregnant Pets
Whether you have a cat or a dog that's expecting, it's important to be aware of the special care that pregnant pets require. Read more »
Link copied!
Interesting Articles
Care and Well-being
Is Wearing Clothes Comfortable for Dogs?