7 Simple Ways To Encourage Your Cat To Play

If you constantly encourage your cat to play with no success, it's possible that it may be feeling sick or stressed. However, it might simply be that you don't know what your cat likes. In this case, there are a few simple tricks you can try out. 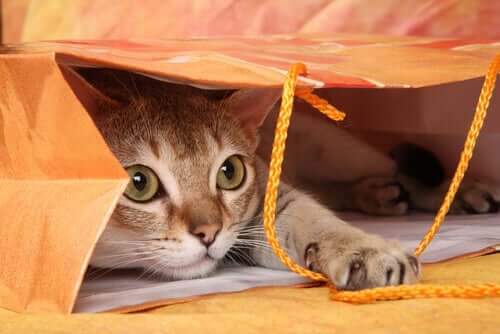 If you want to encourage your cat to play, you’ll need to watch it closely. Start by gradually introducing a few small changes and take a note of what works. Little by little, your cat will get used to moving around and being more active. Remember, a playful cat is usually a happy cat.

How much time should your cat spend playing?

This will depend on the individual. Every cat has its own personality, which can vary greatly from one animal to the next. This includes their level of physical activity.

It’s important to understand that cats will be most interested in “high energy” games around the age of 4 – 5 months. After that, their playfulness will steadily decrease as they get older.

Once cats reach adulthood, they tend to be divided into two main groups. Some cats will continue biting your ankles and attacking your toes when you least expect it, while others prefer a quiet life of napping and curling up on your lap.

It’s also important to be aware that cats are animals with a relatively short attention span. In some cases, just 5 minutes of playtime might be all they need. You may also find a game works better if you play it several times throughout the day.

Is it possible to encourage a cat to play?

Of course, there are ways you can encourage your cat to be more active. Playing with your cat has a number of different benefits, including preventing obesity, fighting off boredom, and even tackling behavioral issues.

In addition, many owners find they really enjoy playing with their cats – if the cat wants to play, that is. According to behavioral experts, cats that play with their owners are more likely to play by themselves at other times. In this next section, we’ll tell you about some of the different ways you can encourage your cat to play:

1. Actively play with your cat

You can’t really expect your cat to enjoy playing all by itself. Toys that do allow cats to play independently are more of a secondary form of entertainment. As a general rule, they tend to enjoy playing a lot more when the toys are controlled by you.

The reason why many cats get excited about toys is that they’re genetically programmed to instinctively pounce on anything that looks like prey. Try wiggling the toy as if it were a small animal, moving it to and fro and varying the speed slightly without the movements becoming erratic.

3. Encourage your cat to play – allow them to catch the toy

Because you’re trying to simulate a natural hunting situation, it’s important that you let your cat win from time to time. Allow them to pounce on the toy, trapping it between their paws so they can bite and lick it. If they never catch their “prey”, they’ll quickly get frustrated and lose interest.

4. Variety is the spice of life

Be sure to try out different toys. It can be useful to take some toys away for a few weeks, before swapping them with the toys currently in use. This will stop your cat from getting bored, and keep them interested in their toys.

Something as simple as giving your cat a cardboard box can provide them with some much needed variety. If you move a toy around inside the box, your cat should jump in and chase it. Learn to take advantage of your cat’s natural curiosity, and you’ll have hours of fun.

6. Encourage your cat to play – finding the best time to play with your pet

When it comes to playing with your cat, some moments are better than others. In the wild, cats will naturally follow a specific routine: sleep, hunt, eat, groom, repeat. Cats generally tend to be more alert after naps and before meals.

Catnip toys can also be a good option. However, not all cats react to it. In fact, one in three cats will be completely unaffected by catnip.

Many cat toys on the market are scented with catnip, but you can also buy a separate pack to rub on their other toys as well.

Cat Toys to Keep Your Pet Stress-Free
Earning their meals is an excellent motivator for cats to exercise. And there are some cat toys specifically designed for this purpose. Read more »
Link copied!
Interesting Articles
Fun and Games
Winter's Here! Enjoy the Snow With Your Dog

Fun and Games
Is it Possible to Stimulate a Dog's Intelligence?

Some dog parks have signs displaying the rules for the park. However, there are lots of other rules for dog…