Home » Health » Causes and Treatment of a Dry Nose in Dogs

Causes and Treatment of a Dry Nose in Dogs

A dog's nose can often become dry simply because it's not been licking it enough. If this continues for extensive periods of time, their nose can become cracked and sore. 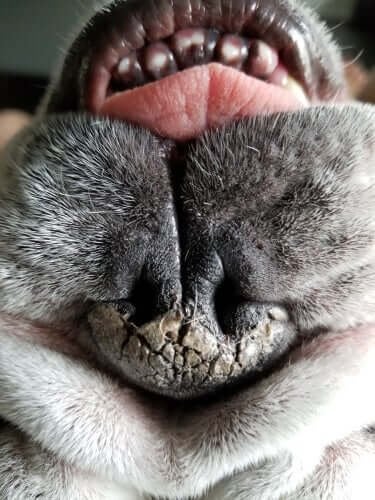 Sometimes, an illness can start with the smallest of physical changes. In dogs, one example of this is a dry nose. Subtle symptoms like this highlight the importance of keeping a close eye on your pets at all times.

Dog owners tend to pay very close attention to their dog’s nose. Most would probably tell you that a wet nose is a sign of a healthy dog. However, this isn’t always the case. Their hydration levels naturally fluctuate throughout the course of the day, and can often be influenced by the weather.

If you notice your dog has a dry, swollen, or bloody nose, it’s best to consult with a vet as soon as possible.

Everyday causes of a dry nose

Excessive dryness and the appearance of small cracks on your dog’s nose can be caused by a number of different factors. So, before you start to worry unnecessarily, let’s find out some of the most common everyday causes.

One of the most common reasons for a dry nose is that your dog simply isn’t licking it enough. Though most owners don’t know it, one of the main reasons a dog’s nose is damp is because it licks it regularly throughout the day. So, if they haven’t had the chance to do it as often as they usually would, their nose naturally begins to dry out.

Direct exposure to the sun or another heat source can also contribute to a dry nose.

If your dog’s dry nose is not the result of any illness, it should return to normal on its own. Usually, a dog will start to lick its nose again as soon as it notices that it’s getting too dry. Alternatively, a quick wash should do the trick.

Washing their nose with a handheld shower can be uncomfortable and unpleasant for your dog. We would recommend using a damp sponge or cloth to gently moisten the area. Avoid products such as soap or talcum powder, as these can irritate the skin, and can make things worse rather than better.

In some cases, Vaseline or special ointments can help to heal a dry nose more quickly. However, it’s best to consult with your vet before using any of these products on your pet.

Diseases that can cause a dry nose in dogs

There are also several more serious illnesses which can cause a dry nose in dogs. Among the least dangerous are conditions such as pollen, mold, food or other allergies. Dryness may also be accompanied by redness or itching, which can be alleviated with antihistamines or steroids.

Some of the most dangerous illnesses associated with a dry nose in dogs include autoimmune diseases such as lupus and pemphigus. Blood, urine, and nose biopsies are needed to confirm the diagnosis. If the results are positive, your vet will likely prescribe an immunosuppressant such as prednisone.

In the case of more serious illnesses, there will generally be other symptoms, such as bleeding, green discharge, lumps, or excessive swelling around the nose.

More than just physical symptoms, owners should make sure to pay attention to any other physiological or behavioral changes in their pet. Vomiting, diarrhea, lethargy, loss of appetite, or excessive itching are some of the most common symptoms.

If you notice your pet has a dry nose, or any other changes in appearance, the first step is to take them to the vet for a check-up. The information owners provide to their vet is the key to getting the right diagnosis. 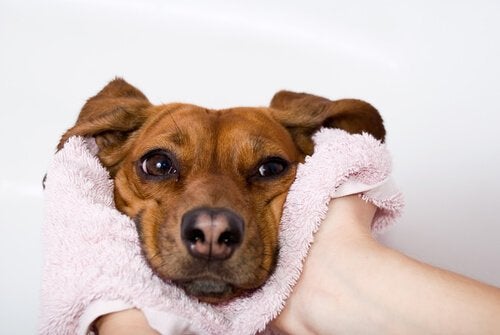 When Your Dog’s Dry Nose Means Illness
When a dog has a dry nose, it usually says something about their health, whether they're a puppy or an adult. A dog's nose should be moist most of the time. Read more »
Interesting Articles