Doggy Kisses - Much More than just a Lick! 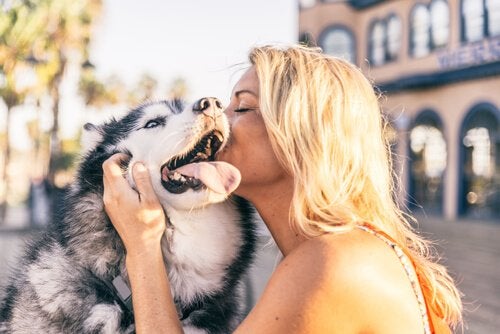 Dogs have many different ways to show us their affection. And of these, one of the most common is with doggy kisses. Humans sometimes show love and affection by sharing kisses – and it’s just the same with dogs. If a dog licks its owner on the face or even ears, it’s a way of expressing warm fuzzy feelings.

There are a number of scientific studies claiming that, as well as being a way of showing affection, licking allows dogs to get information from the lucky recipient. This helps to explain why dogs are so good at telling when we are sad. From a very young age, our furry friends learn to communicate with us through their tongues.

So as we can see, licking is far more than a simple display of affection. Sometimes, it is a way for our dog to show that he or she accepts us as leader of the pack. We can also get a lot of information from the language of licks.

What’s more, some experts say that our dogs use their tongues as a way to explore and relate to their environment.

There are many types of different doggy kisses we can get from our four-legged friends. Some express love, affection or desire for attention. Some are short, some are long – but they are all sloppy, and full of meaning.

How Dogs React To What They Sense In Us

If you’ve had dogs you’ll know this – and now scientific studies,support the idea that the dog is man’s best friend. They also respond to human emotions, to the point of being sensitive to our feelings of sadness or distress.

Studies show that dogs are in fact able to empathize with us. They are able to put themselves in our place and feel, in their own way, what we are feeling. You could call it a kind of emotional contagion.

Dogs are known for their propensity to rummage around in the trash, which is obviously a great way to spread germs. But that’s not all they get up to. A typical greeting between humans is usually a brief peck on the cheek. But dogs go much further – their way of greeting each other is more commonly to smell each other’s backsides.

What’s more, when we’re out walking with our dogs, we often see sniffing stools left in the street by other dogs. There’s no denying that this transmits a huge amount of germs, and even viruses and harmful bacteria.

Some Horror Stories Of Doggy Kisses

One well-known tale of the potential consequences of sharing saliva with our furry friends is of a woman from the United Kingdom who contracted a serious infection from her Italian greyhound. She wasn’t aware that anything was wrong until whilst talking to a relative on the phone, she had difficulty speaking.

By the time the paramedics arrived at her house, she was already lying prone in a chair, and her situation was deteriorating rapidly. The unfortunate dog owner did escape with her life, but only thanks to speedy treatment and a course of strong antibiotics.

The cause of the infection she had contracted was the bacterium Capnocytophaga canimorsus. This frequently occurs in the mouths of dogs and cats. This isn´t an isolated, freak occurrence either – 13 similar cases have happened in the United Kingdom alone.

During 2011, scientists working in Japan collected dental plaque from 66 dogs, as well as from 81 humans who regularly visited canine training schools and veterinary clinics in Okayama, Japan. When examining the samples, the scientists found that the mouths of both dog and human research participants contained the same bacteria. These were transmitted through dog-human kisses.

To be specific, the bacterium they discovered was the one associated with periodontitis, a disease that begins in the gums and which can lead to heart disease, kidney disease, and diabetes. What’s more, it’s believed that periodontitis is the leading cause of tooth loss in adulthood.