Kooki The Unwanted Dog Has a New Opportunity

There are hundreds and thousands of abandoned animals with different diseases on the streets. Because of their illnesses, we judge them without having the slightest idea of what is wrong 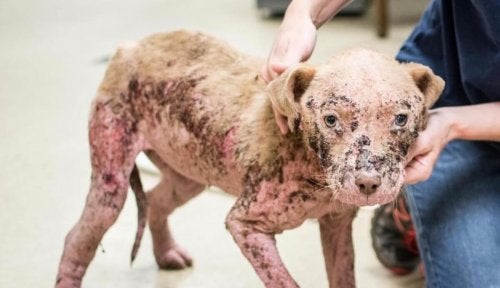 Even in the 21st century, we still judge things by their appearances. This story is basically about that. Wherever Kooki went, nobody wanted to look at her. However, as we always say, sometimes sad stories have happy endings.

Fortunately, there are non-profit centers and shelters available to help unwanted dogs. They do their great work only for the kindness and humanity towards the animals.

This is what happened to the protagonist of this story, Kooki.

Kooki didn’t know what was happening to her. Her hair had fallen out, her skin itched, and even her face hurt. She realized that people were not looking at her, and children ran away from her. But she was so affectionate! Before, the kids looked for her to play, but now something had changed…

She didn’t understand why, but it was obvious that she didn’t just imagine it. She was indeed very alone. Sometimes she looked at her paws and they were a strange red color. When she licked them, they were rough and tasted bad. She often felt awful, and she didn’t remember the last time that someone pet her.

Kooki came to the conclusion that she was full of wounds. But people thought that she was a dog that got into fights and those were her battle wounds.

Destiny or some superior force wanted Kooki to be found by an American shelter and so they took her with them. Kooki’s condition was truly terrible. But soon, after some analyses, they found out what happened to her. Her disease was an extreme case of scabies.

Scabies is caused by a parasite that infiltrates under the skin. It reproduces thanks to what it eats from your body. While it walks, it goes expanding its eggs all over the place. These, in turn, create thousands of parasites that start to walk under the skin and cause a horrible itch that doesn’t stop.

The more time that passes, the more severe it becomes and the more difficult it is to eliminate. In addition, it wreaks havoc on the animal’s skin and appearance.

Kooki seemed to have had scabies for months, maybe years, since her condition was extreme. It had affected her face and she didn’t have fur on most of her body. She looked more like a zombie dog than a sweet and loving dog. In fact, she was even already beginning to suffer respiratory problems.

Soon the shelter got underway and ordered the adequate veterinary treatment. Her state was so advanced that she even had to receive a blood transfusion.

The doctors attributed the reason for her scabies to having ingested rat poison while she was walking around looking for something to eat in the street. Whatever it was, Kooki was lucky to be found by someone that was willing to help her.

Even though the process was long and tedious due to Kooki’s state, the treatment worked. Kooki started to recover. She started to grow hair, her paws returned to their normal form, and her skin wasn’t red anymore. Even more, she breathed better and her physical and internal state changed completely.

Today Kooki is a totally different dog. Now everyone sees her and wants to play with her. Although there is something that hasn’t changed in her: her friendliness and beautiful personality. But that was something that many couldn’t or didn’t want to see before.

We hope to hear many more cases like Kooki’s and stop the plague of abandonment little by little.

Source of the images: www.upsocl.com