Learn About These 9 Common Feline Illnesses 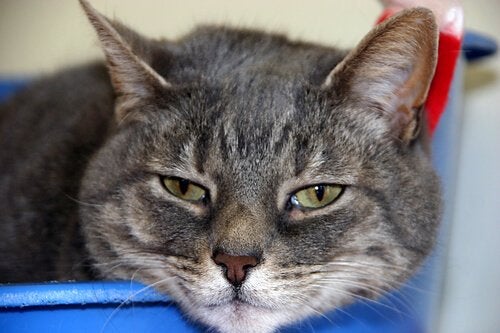 The list of feline illnesses that a cat can get during their lifetime is a long one. That’s why it’s so important to take good care of your cat. This means providing a good diet and getting her check-ups. Keeping up with vaccinations is also important. Read on and we’ll discuss details about some of the most common diseases in cats.

What are some of the most common feline illnesses?

Allergies in kittens can cause respiratory symptoms, such as coughing, sneezing, difficulties in breathing, or skin problems. In this last case, the little one will feel intense itching. Because of this, she will lick and scratch constantly and will even pull out some of her fur. In order to treat this problem, you should first identify the allergy.

Known as “cat flu”, this is one of the most frequent respiratory feline illnesses. It tends to be dangerous in unvaccinated kittens. Equally, animals that received the vaccine can suffer from a severe form of this disease. Kittens with this disease will have runny eyes, a cough, sneezing, nasal congestion and a large quantity of mucus.

Inflammation in the ear canal of cats is often painful. It has serious consequences if not treated on time. Among the causes are parasites, certain fungi, and bacteria.

The major problem with this disease is the formation of small crystals composed of calcium and magnesium in the bladder. Consequently, these can block the urethra causing a critical condition.

Due to anatomical characteristics, the obstruction of the urethra is more common and more serious in males. The main signs that a cat is affected by Feline Urological Syndrome are the following:

When the urinary tract is blocked, the pain increases and causes vomiting.

This is a very common condition, especially in older cats. It consists of the inability of the kidneys to eliminate toxins and other waste products from the blood. As a result, this produces signs of uremic poisoning. Insufficient renal functioning can present itself in an acute manner. Also, it can gradually manifest itself over weeks and months.

A kitten with kidney problems will lose its appetite and become thin. In addition, she will also drink more water and urinate more.

Of all the common illnesses in cats, hypertrophic cardiomyopathy is the most frequent form of cardiac disease. This ailment is thought to be hereditary. It causes an enlargement of the myocardial mass of the left ventricle. Consequently, the volume is reduced in the cardiac chamber. The amount of blood that it pumps is also reduced.

These subtle signs tend to show themselves. So, you should pay attention to the following:

This is a virus which is highly contagious caused by feline parvovirus. In fact, it’s provoked by inflammation of the intestinal mucous. A cat infected with this can present the following symptoms:

Leukemia is one of the common feline illnesses that cats get by direct contact with other infected cats. The gestation period for this disease is very long. It may even last for years until symptoms are present.

This is a retrovirus that incorporates genetic materials from the cells. Because of this, it’s very difficult to treat. Moreover, treatment may provoke various illnesses and complications. For example:

Also known as feline AIDS, HIV affects the immune system, causing a progressive deterioration of our defences. As a result, the cat risks getting infections and illnesses from viruses, bacteria, fungi or parasites. Usually, the most direct way to contract the virus is through a bite from another animal.