6 Causes of Eye Problems in Cats

Eye problems in cats are the most common reasons for a visit to the vet, and your chances of successful treatment depend on early detection. 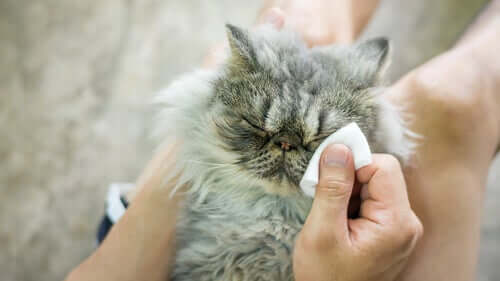 Cats can suffer from numerous eye problems, some of which are similar to those suffered by dogs. Eye problems in cats, and in dogs, should be considered an emergency. If you notice excessive watering, changes in appearance, or excessive blinking, you should go straight to the vet.

It’s common for cats suffering from eye and face pain to have a loss of appetite. As a result, it’s important to take note of any changes in eating habits. Check your cat’s eyes to see how they look normally. This way, you’ll be able to spot it when there’s a problem.

1. Conjunctivitis, one of the most common eye problems in cats

This is the most common eye problem in cats. It’s an inflammation of the membrane that covers the inside of the eyelids and part of the eye. This often leads to watery eyes or discharge in one or both eyes.

Viral herpes is a common cause of conjunctivitis in cats. However, other causes include allergens in their surroundings, irritants, and bacterial infections.

Persian and Himalayan cats have a facial structure that can be prone to blocking tears, resulting in watery eyes. With these breeds, it’s best to use an appropriate eyewash or medication to prevent conjunctivitis in the first place.

This condition is particularly common in kittens that live outdoors. Generally, ulcers are caused by damage to the cornea. It’s possible to spot this kind of damage if you see your cat squinting or if there’s discharge, scratches, redness, or swelling around the eye.

Corneal ulcers occasionally cause a dark, discolored spot on the eye. This is what happens when the cornea is dying.

This is an inflammation of the vascular sections inside the eye. All its causes are not known, although it’s believed that regular inflammation or severe corneal ulcers can be a significant factor.

Particular signs include the color or size of the iris or pupil, red eyelids, light sensitivity, pain, or loss of vision.

This is a very common eye problem in cats. It’s caused by increased fluid pressure in the eye, which happens due to poor drainage of fluid.

When this happens, the accumulated fluid puts pressure on the optic nerve. This is the nerve that transmits visual information to the brain. When the pressure gets too high, the nerve becomes damaged and can cause blindness.

There are several things that can lead to blindness. If there’s damage to the retina, the blindness can be partial or total. This condition can be a slow deterioration, so it’s important to detect it early.

Get into a habit of observing any changes in the way your cat moves and plays. It’s the only way that you’ll be able to stop an eye problem early on.

Damage to the retina can be the result of high blood pressure, which can cause problems such as hyperthyroidism, diabetes, or kidney disease. This is why regular blood pressure checks at the vet are important for older cats in order to prevent eye damage.

6. Other causes of eye problems in cats

Many feline health problems are caused by other diseases, which can make treatment and management more complicated.

Secondary eye conditions can be caused by viral diseases such as herpes, feline leukemia, immunodeficiency or infectious peritonitis, as well as Cryptococcus.

In summary, just like with most health problems, your best chance of early detection is with regular visits to the vet, and eye problems in cats are no different.

Eye Diseases in Cats: prevention and care
While it's true that it's relatively common for felines to suffer from eye diseases, it's also true that they're relatively neat animals Read more »
Link copied!
Interesting Articles
Illnesses and Treatment
Mycotoxins and Animal Production