The Himalayan Cat: A Cross Between Persian and Siamese

The Himalayan cat has all the beauty of its Persian relative. They are well-known for their thick, luxurious coats and their stunning blue eyes, but these aren't their only notable characteristics. 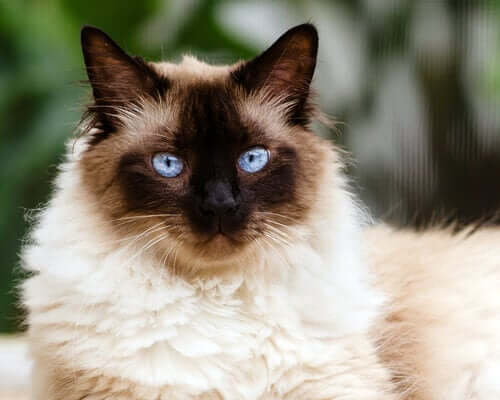 The perfect combination of Siamese and Persian, the Himalayan cat is a strikingly beautiful breed. But beyond their physical appearance, the Himalayan cat’s laid-back temperament and ability to adapt to any situation have made it one of the most popular breeds in the world.

But before you decide to adopt your own Himalayan cat, you need to know how to look after them properly. So, in this article, we’ll tell you everything you need to know.

The origin of the Himalayan cat

The Himalayan cat’s appearance is a testament to its Asian origins. Like many long-haired cats, the Himalayan is the result of years of selective breeding. It’s a cross between a Persian and a Siamese, two of the most popular cat breeds in the world.

Although they’re often thought to come from the UK or the US, the first Himalayans were actually born in Switzerland back in the 1930s. It’s thought that the owners were attempting to create a new breed that combined the physical features and physique of a Persian, with the coat and eye-color of the Siamese.

For many years, feline associations refused to recognize the Himalayan as a true breed. They weren’t officially recognized until 1957, in England, under the name Long-haired Colorpoint. They were later recognized by the US, where they quickly rose in popularity.

It’s worth mentioning that the name “Himalayan” is not actually a reference to the famous mountain range, or to the cat’s oriental origins. In fact, the Himalayan cat was so named because of its close resemblance to the Himalayan rabbit.

Naturally, the Himalayan still has many of the same physical characteristics as the Persian. They are of average size, with a robust, compact body and short, sturdy legs. Their heads are round, while their faces are almost completely flat.

Their long, silky fur is another trait passed down from their Persian ancestors. However, their point coloration is more like that of the Siamese, from whom they have also inherited their stunning blue eyes.

Accepted coat markings can vary slightly, but Himalayan cats must always be pointed. The most common coat colors are blue, chocolate, red (or flame), seal, lilac and tortoiseshell.

The Himalayan cat is known for its laid-back character and great intelligence. They often develop a close relationship with their owners, with whom they are particularly affectionate and playful.

They are normally shy and reserved around strangers, but if you take the time to socialize them properly, they can learn to get on well with everyone and adapt easily to new environments.

Himalayans are well-known for their ability to learn quickly, which makes training them so much easier. They enjoy discovering new toys and activities that stimulate the senses, especially if they awaken their highly-developed hunting instincts.

Caring for your Himalayan cat

Himalayan cats require daily grooming to keep their coat in top condition. This prevents the build-up of loose hair and dirt, and, in turn, will prevent your cat from developing hairballs. Experts also recommend bathing them at least once a month to keep their coats clean and shiny.

Good dental hygiene is also important if you want to prevent plaque and other related dental diseases. Ideally, you should brush their teeth at least twice a week to remove any food from their teeth and gums.

A rich, stimulating environment is essential for any cat, encouraging it to stay both mentally and physically active and preventing a number of behavioral issues. They’ll also need to have access to a cat-scratching post so they can wear down and sharpen their claws.

Himalayan cats are strong, hardy animals and, with the right care, they rarely get ill. However, they can suffer from some hereditary conditions, and common ailments such as:

The average life expectancy of a Himalayan cat is between 12 and 15 years, but this can often rise with the right veterinary treatment and preventative care.