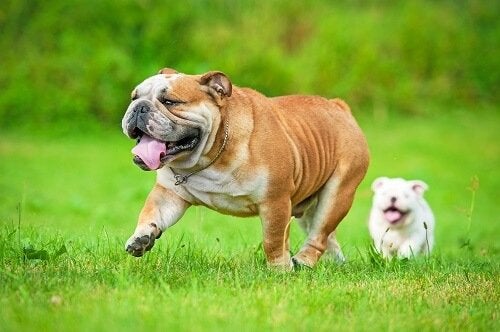 Many pet lovers love dogs with flat faces and snouts. The folds in their faces make them look even sweeter. Therefore, these dogs have an increasing number of fans in cities around the world. Some of the dogs with these traits usually suffer from brachycephalic syndrome.

What is a brachycephalic dog?

This complicated term refers to dogs with a flat snout. They have the following characteristics:

No breed had these traits naturally. Humans have been “creating” them according to aesthetic criteria or for other purposes, such as sales and marketing. All of these breeds are more prone to suffer from brachycephalic syndrome.

What is brachycephalic syndrome?

Although some breeds are predisposed to suffer the syndrome, this doesn’t mean that all dogs develop it.

In summary, the pathologies that characterize brachycephalic syndrome keep these dogs from breathing properly.

The importance of breathing for dogs

All living beings need to breathe to bring oxygen into the body. In the case of dogs, it’s also a way to regulate their body temperature because dogs don’t sweat. Actually, dogs sweat a little through the pads of their feet, but this is not enough to keep them cool.

Panting is a rapid and shallow way of breathing. By panting, water evaporates off the dog’s tongue more quickly. This takes place in the upper respiratory tract, which helps regulate the body temperature of the animal.

This important process is affected when the dog suffers from brachycephalic syndrome. When they don’t breathe properly, a dog can suffer from heat stroke. When this happens, the cells of the body die at an accelerated rate.

In addition, the brain can swell and cause seizures. The digestive system could run out of blood supply, causing ulcers to appear. The kidneys can also suffer irreversible damage. All in less than an hour.

When you have a brachycephalic dog, it’s necessary to know their breathing patterns because they have more difficulty breathing than other dogs.

Although there are difficult problems to avoid when you have a brachycephalic dog, there are some rules to follow:

Find out the dog’s genetic line

Before acquiring a dog from one of the dogs breeds that are predisposed to suffer from brachycephalic syndrome, you should do some research. The best thing is to look for a responsible and trustworthy breeder that guarantees that the pet comes from healthy parents.

Regulate the temperature of the environment

Brachycephalic dogs should avoid exercising during the hottest hours of the day. In addition, you should keep them hydrated with plenty of water during the summer. It’s not recommended for you to leave your pet alone in the car on hot days.

Brachycephalic dogs should eat properly and do only the necessary amount of exercise. Being overweight makes it even more difficult for them to breathe.

When to go to the veterinarian

There are some symptoms that you should keep an eye out for. If they occur, go to the specialist:

When the veterinarian diagnoses a dog with brachycephalic syndrome, there are different types of treatment: