Brown Vomit in Dogs: All You Need to Know

This can be caused by the ingestion of objects that obstruct the animal's intestine. It can also be a consequence of hemorrhagic ulcers or diseases. 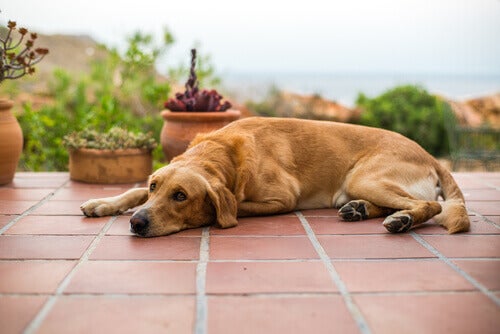 Even if vomiting is a common symptom of many diseases, it shouldn’t be overlooked. In some cases, your dog may simply vomit because it ate something inappropriate. However, brown vomit in dogs can be an indication that something much more serious is happening.

Below are some of the most common causes of your dog’s brown vomit:

Some causes of brown vomit are more serious than others. For example, bleeding ulcers and bowel obstructions should be treated immediately. If your dog is coughing up brown liquid due to something it ate or due to bleeding, the severity of the bleeding will depend on what it ate or on how much and where it’s bleeding from.

Why do dogs suffer from brown vomit?

Brown vomit in dogs can have several causes and can happen to any dog. It can be alarming to discover that your dog is vomiting brown liquid. However, in most cases the dog can recover without permanent consequences if it receives appropriate treatment.

If your dog develops an ulcer and starts bleeding, this could make it vomit. If the ulcers are located in the upper intestine or stomach wall, the vomit could turn brown because the blood is digested by the stomach acid.

A blockage in the intestines can also lead to brown vomit. The intestines can block due to the ingestion of an object that can’t pass through them. Some common objects found in a dog’s stomach are: coins, bones, buttons, socks and underwear, toys and marbles.

Blockages can occur due to bone or rawhide ingestion, or because of a growth in the abdomen. The items will move through the gastrointestinal tract for about 10 to 24 hours. Thus, blockage symptoms will occur within 24 hours after ingestion.

On the other hand, you should pay attention to see if the reason your dog is suffering from brown vomit is something it ate. This can be something as simple as having ingested something brown. If it has ingested chocolate, dirt or feces, these can cause brown vomit.

Another reason could be bleeding in the digestive tract. This can be caused by a bleeding tumor in the upper small intestine or stomach. It can also be blood from gum or teeth disease as well as a blood clotting disorder.

What to do about brown vomit in dogs?

Usually, stomach ulcers can be easily handled medically. However, if they perforated the stomach wall, your dog may require hospitalization and surgery.

If stomach ulcers are severe, even if they haven’t yet pierced the stomach wall, your dog may also need hospital care, as well as blood transfusions, intravenous fluid replacement therapies, and nutritional and electrolyte support.

Foods that are highly digestible can help reduce the irritation and inflammation of the digestive tract. The best way is to feed your dog small meals several times a day. Additionally, your pet should always have access to water, unless your veterinarian recommends otherwise.

If you take your dog to the vet soon after the obstruction occurs, surgery can be avoided and the obstruction can be removed by endoscopy. If tissue death occurs —called necrosis—then it’ll be necessary to remove the affected parts of the intestine along with the object.

How to prevent brown vomit?

The best way to prevent intestinal blockage is to monitor your pet and take action if you notice it’s eating something it shouldn’t. Don’t let your dog eat rawhide, cooked bones, toys, and unsafe objects.

Only give your dog toys that are larger than its throat, as they’ll be impossible to swallow. Try to eliminate stress factors, such as loud noises, from your dog’s environment, as these can often contribute to stomach irritation.

If you notice that your dog has swallowed something, your vet may suggest that you induce vomiting in order to prevent a blockage.

It may be beneficial to teach your dog the command of “let go” and “stop eating” if you catch it eating something it shouldn’t. Diet changes, such as introducing highly digestible foods that can reduce inflammation and irritation, can prevent your dog from developing stomach ulcers.

Natural and Holistic Veterinary Medicine
Holistic veterinary medicine observes the animal in a comprehensive way and is based on natural treatments. Learn more in this article! Read more »
Link copied!
Interesting Articles
Illnesses and Treatment
What Are the Symptoms of Leukemia in Cats?